Ferrari's Sebastian Vettel has set the pace for the second day in succession at the first Formula One pre-season test sessio at Jerez in Spain. 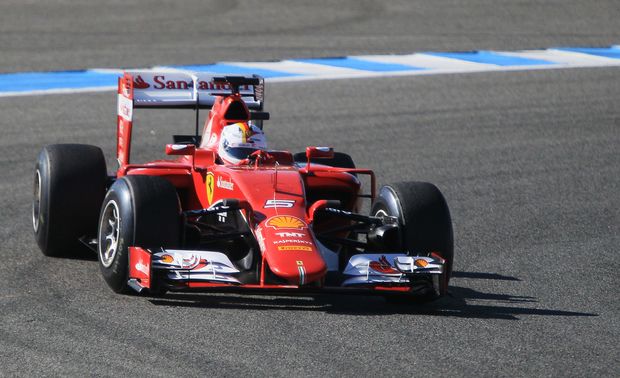 The German was 0.833 seconds clear of Sauber's Felipe Nasr.

The four-time world champion is scheduled to hand over the car to team-mate Kimi Raikkonen for the final two days of the test.

Champion Lewis Hamilton was fourth despite a reliability issue.

The Mercedes driver missed the final three hours of running because of a water leak caused by a failed part.

Meanwhile, Jenson Button managed only six laps in the McLaren-Honda as problems continued to plague the team.

That was only 10% of the target set by racing director Eric Boullier yesterday after Fernando Alonso had also only completed six laps on the car's first day in action.

Like Alonso, Button failed to set a representative time as the McLaren was stranded in the pits with what the team said were "ancillary problems".

It is an inauspicious start to the renewed relationship between McLaren and Honda, which is returning to the sport for the first time in six years.

The two hope eventually to repeat the domination they enjoyed in their previous partnership from 1988-92.

The Lotus car ran for the first time after missing the first day of the test, with Venezuelan Pastor Maldonado setting sixth-fastest time overall.