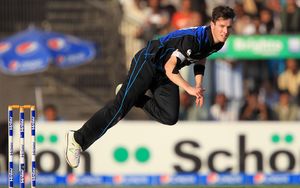 Milne got through seven overs in the four-wicket win over Sri Lanka in Nelson, before he suffered a side strain.

Initially Hesson didn't think it was too bad.

"It is one of those muscle injuries that you tend to have another re-think but hopefully we got it early enough. Like any quick bowler the old side injury is something you have to be a bit cautious of, so he could have carried on but we decided against it."

Milne didn't play the first of the two final ODIs in Dunedin this weekend.