A fine New Zealand bowling performance has ensured a memorable victory in the second cricket Test at the Basin Reserve and a rare 2-0 series sweep against Sri Lanka. 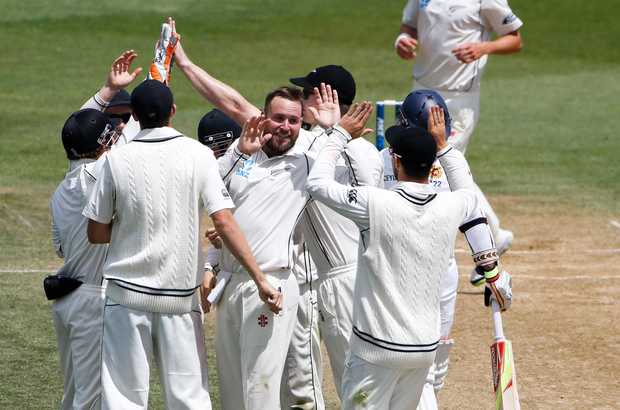 Mark Craig and the team celebrate the wicket of Rangana Herath. Photo: PHOTOSPORT

Tim Southee took the final wicket leaving Sri Lanka all out for 196, the Black Caps winning by 193 runs.

After Kane Williamson and BJ Watling's batting heroics on the penultimate day, it was the turn of the Black Caps bowlers to impress.

Trent Boult and Doug Bracewell took two wickets apiece before lunch, including that of in-form batsman Kumar Sangakarra to leave the visitors reeling at 110 for five at lunch, chasing a victory target of 390.

The Sri Lankan great appeared unhappy to have been given out on review, but replays indicated he nicked a Boult delivery through to wicketkeeper.

Mark Craig was then responsible for the next three wickets and was on a hatrick after getting Rangana Herath out LBW.

Sri Lanka entered the final day's play with 45 for 1 after Kane Williamson and BJ Watling produced a world record sixth wicket partnership of 365 runs to guide New Zealand to a winning position.

It was a remarkable fourth day for New Zealand, after resuming on the fourth day on 253 for five at the Basin Reserve.

The pair had to do something special after New Zealand slumped to 159 for five, a lead of just 24 runs, after lunch on day three.

Their record partnership surpassed the 352 Watling and McCullum scored against India last year, also at the Basin Reserve, where Watling made his previous-best Test score of 124.