New Zealand cricket captain Brendon McCullum has been presented with the 'Keys to the City' of Wellington in recognition of his historic triple century in February 2014. 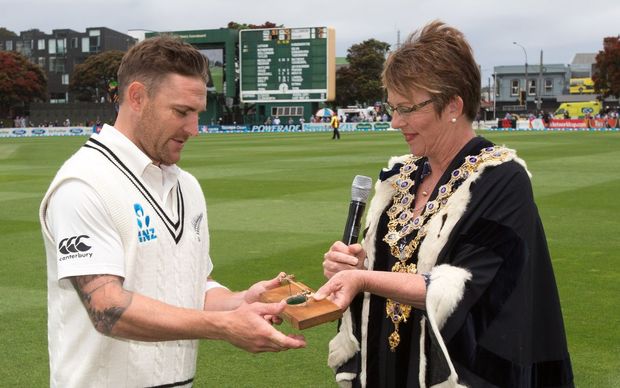 Brendon McCullum is presented the Keys to the City by Wellington Mayor Celia Wade-Brown. Photo: PHOTOSPORT

Wellington Mayor Celia Wade-Brown made the presentation during the lunch break at today's opening day of New Zealand's five-day test against Sri Lanka at the Basin Reserve.

McCullum became the first New Zealand cricketer to hit a test triple century when he made 302 against India at the Basin Reserve almost a year ago, helping his side to a series win.

In his acceptance speech, McCullum thanked the Wellington City Council and Ms Wade-Brown.

"All the people that turned up that special day as well - and those teammates as well who obviously were a part of something pretty special," he said.

"It's a tremendous honour, I'm very humbled. Thank you very much to Celia and the people of Wellington."

Previous recipients of the Keys to the City include Sir Peter Jackson and Sir Richard Taylor.