Prime Minister John Key is advising farmers not to get too worried about the milk price. The average price for dairy commodities traded in the auction earlier today fell by more than 3 percent to $US2561 - its lowest point in five years.

The key product for dairy giant Fonterra, whole milk powder, fell by more than 5 percent from $US122 to $US2400, while skim milk powder was down 5.7 percent. 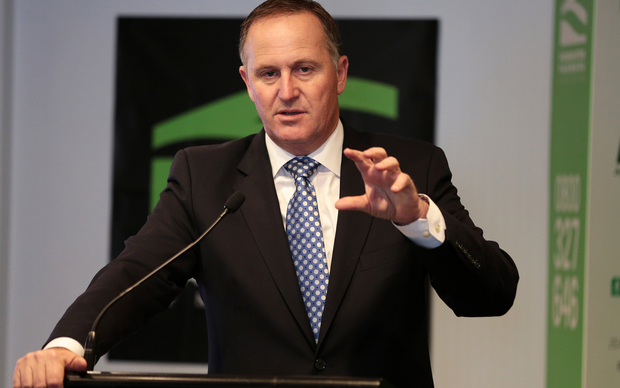 Fonterra said the price of whole milk powder needed to rise to about $US3500 by March, next year, if it was to maintain its forecast payout to farmers of $NZ5.30 per kilo of milk solids.

Mr Key spoke to Federated Farmers National Council in Wellington this morning, saying he was optimistic that the dairy price slide would bottom out soon and start climbing again.

"I don't think that's really based on hope, it's fundamentally based on what is a massive consumer demand. You've had a number of factors in dairy at the moment that have just been unusual - fantastic growing conditions around the rest of the world, displacement through what's been happening in Russia, a build-up of inventories in China.

"So there's been a few things happening at one time and the market ultimately responding to what you see in terms of those prices. But just give that a little bit of digestion and fundamentally the pathway's going to be back the other way."

Mr Key said the Chinese government was trying to slow the economy down but the consumer demand there for New Zealand products would remain strong.

"When you go and talk to someone like COFCO, who are the largest importers in the world and they basically import food, they just say consumer demand is really strong. You can see it with wool and meat prices.

"I remember being there a year or so ago, and getting off the plane and being struck by first the Premier and a couple of other people basically saying to me, 'We just want to buy more meat from New Zealand'.

"They went from being a relatively small purchaser of lamb meat to the largest single purchaser overnight and it's on the Chinese leadership side that they want to buy more product and they like New Zealand and it's obviously part of their strategy to be a long term buyer from New Zealand."

Mr Key told the farmer council that the free trade agreement with South Korea announced last the weekend was a good one, with an immediate $NZ65 million tariff reduction.

He believed that the stalled Trans-Pacific Partnership negotiations would get there as well, in the end, and he said there were some other trade deals in the pipeline.

"One of the really exciting ones on the meat front is the Gulf States. We got pretty close to getting the Gulf States done. It sort of stopped on an issue we've dealt with, with the Saudis.

Southland farmer Vaughan Templeton said the news came as a body blow, and that he was skeptical of Mr Key's claim global dairy prices would rebound.

"Seems highly unlikely, frankly, though everyone is still saying that the long-term picture is quite positive," he said.

Federated Farmers dairy chair Andrew Hoggard said today that farmers are resigned to a drop in the milk price when Fonterra reviews its forecast next month.

"The hope was that we'd start seeing lifts and if the price had got to a certain point by February-March, then Fonterra would be more certain about the $5.30 payout, so that now puts that at risk. I think there will be a GDT result coming out before they do their next board meeting, so unless there's a dramatic lift in that, the chances are we'll probably see a drop in payout, unfortunately."

Mr Hoggard says it may leave some farmers in financial trouble.

"There are a small percentage of farmers who are quite heavily indebted. The message I'm getting from banks is that the long-term is still good, that they will get through the short term. You've got to hope that the banks are looking at that long term and that they're realising they've just got to get clients through the short term, that there's no gain on foreclosing on someone in a season like this because they're not going to get their money back."

Dairy analyst Susan Kilsby, of AgriHQ, predicts a lower payout. She said the continuing fall in milk powder prices is disappointing, as there were indications that prices would stabilise - particularly whole milk powder.

"Certainly putting a lot more downwards pressure on that forecast. Our own Agri HQ forecast is back to $4.55, so we are sitting 85 cents below where Fonterra is. We are kind of worlds apart at the moment, so we really expect that it will be revised downwards and we will wait and see exactly what level that comes down to.

"What it does over the longer term is put some pressure back on the farmers in the Northern hemisphere, they are not getting those price signals just yet, although they are starting to in some parts of Europe, but that will slow global milk production overall and it also makes dairy commodities very attractive to buy."