The jury is out on how much replanting will be done after a surge in logging in the past few years, the Farm Forestry Association says. 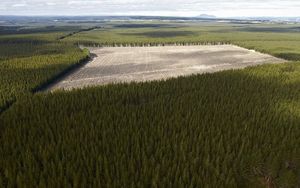 A new forestry co-operative is hoping to cash in on New Zealand's so-called wall of wood. Photo: PHOTO NZ

President Ian Jackson said 25 million tonnes of wood was cut two years ago. Based on harvesting for the first half of this year, the country had been heading for an annual total of more than 30 million tonnes before export log prices tumbled when China stopped buying.

He said most of that increased harvesting was on smaller forestry blocks, including farm forests, and that had ground to a halt.

Mr Jackson said it was unclear how much of the already felled forest will be replaced.

"That's going to vary. Certainly the corporates, they're business as usual, they replant. A lot of the farm areas may or may not be replanted.

"I guess under the Emissions Trading Scheme (ETS) you've got liabilities and a lot of people probably don't understand that, but you've got two or three years to replant.

"So I don't know whether all that area will be replanted. Maybe not, because we've got a dearth of replanting in New Zealand and we're probably losing 10,000 hectares of forest a year at the moment."