A protest rally has been held at Waikato University over plans to cut staff numbers and some courses. 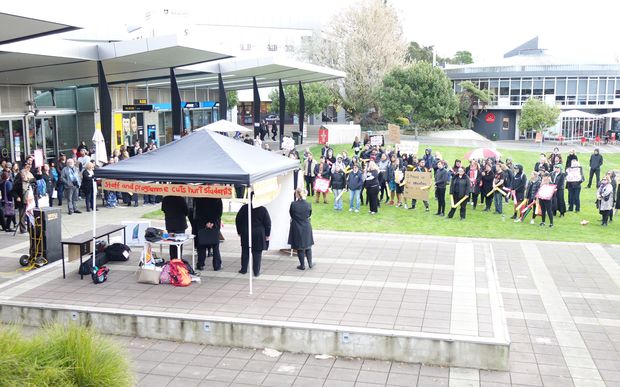 About 200 people attended the rally on campus at lunchtime on Wednesday.

The university proposes to cut 16 full-time jobs at the School of Education, but create six new ones.

It also wants to axe some telephonists and engineering staff, as well as hand its Pathways programme providing pre-degree courses to a private provider.

The Tertiary Education Union said cuts would affect the quality of education provided at Waikato University.

Vice Chancellor Neil Quigley said most of the staff reductions would be achieved through retirement and not redundancy.

He said while there would be fewer courses, no programmes would go.

Professor Quigley said, with a drop in enrolments over the last three years, the university has to live within its means.

He said the small turn-out at the rally was an indication staff were not too concerned, but the Tertiary Education Union strongly disagreed, saying some staff did not attend because they were scared.

"There is a climate of fear (on campus) and some people were too scared to come and be seen by him (to be) standing up against him."