Plans to demolish a block of former state housing flats in central Wellington have been given the go ahead by the city council. 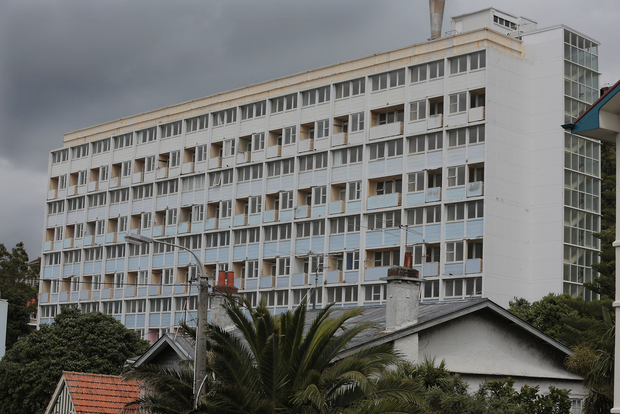 The former Housing New Zealand complex is now owned by Victoria University and will be demolished. Photo: RNZ

Some residents say they'll be glad to see the "eyesore" gone but others are worried about what might replace the Gordon Wilson complex on The Terrace.

The multi-storey block, built in 1959, has been vacant since 2012 when engineers found its concrete facade could collapse in an earthquake or storm, and 130 Housing New Zealand tenants had to leave as a result.

The building is now owned by Victoria University and last night Wellington city councilors voted to rezone it as part of the university, and remove its listing under the city's District Plan.

Councillor Andy Foster said there was no affordable way to save the building.

"A huge amount of money would need to be spent to fix the building up to make it habitable again.

"It didn't matter what you did, you were going to be burning a very, very large amount of money. There was a negative value to the building of at minimum $17 million."

Mr Foster said the building was literally falling to pieces, with slabs of concrete breaking off from it.

But one of the three councillors who voted against the move, Iona Pannett, said it was one of only a few heritage buildings relating to the post-World War II era.

She said councillors should have taken the cautious approach when deciding the fate of such a significant building.

"I just think we need to be very careful in terms of thinking about heritage and what we want to see in 100 years time."

Ms Pannett said she was also worried about what would happen to the area if Victoria University replaced the building with new accommodation.

That's a concern echoed by nearby resident John Blincoe. "We don't enjoy late night alcohol-fuelled disruption, so our position is quite simple. We want the university to assure us that we can have peace and quiet after about 9 o'clock at night."

The university's director of campus services, Jenny Bentley, said she did not know what the land would be used for - whether it would be student accommodation, lecture halls, studios or something else.

"Our plan would be simply to demolish Gordon Wilson flats, landscape the site and that would remove was is obviously a potentially dangerous building, but it would also allow time for the university to consider what our next steps are."

Whatever happened, she said, the university wanted to ensure students would be considerate of their neighbours.

She said the building was likely to be demolished some time next year.