Housing New Zealand is in negotiations to sell a large block of land in central Wellington previously used for social housing to Victoria University. 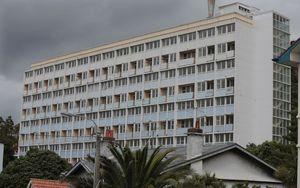 The Gordon Wilson block of flats on The Terrace. Photo: RNZ

Radio New Zealand understands the talks are ongoing but neither party will confirm that, citing commercial sensitivity.

The Gordon Wilson flats on The Terrace used to be home to 131 people who were moved out in 2012 when Housing New Zealand found concrete facades could fall in an earthquake or strong winds.

The agency said in April last year it would make a final decision on the site's future in three months, but six months on from that deadline it's still not saying what will happen to it.

The MP for Wellington Central, Labour's Grant Robertson, said he is worried Housing New Zealand plans to abandon social housing in the central city and build only in the outer suburbs, which, he said, would run the risk of creating low-income ghettos.