Bookings on the South Island's famous tramping tracks are running at an all-time high, raising concerns about overcrowding and potential damage to New Zealand's reputation overseas.

Just as with the Tongariro Crossing in the North Island, the Milford and Routeburn Tracks have never been busier - so busy that there is increasing concern that the tracks might be seen overseas as uncomfortably congested and overbooked.

Other tracks in the South Island, meanwhile, are struggling to cover their costs and stay viable. 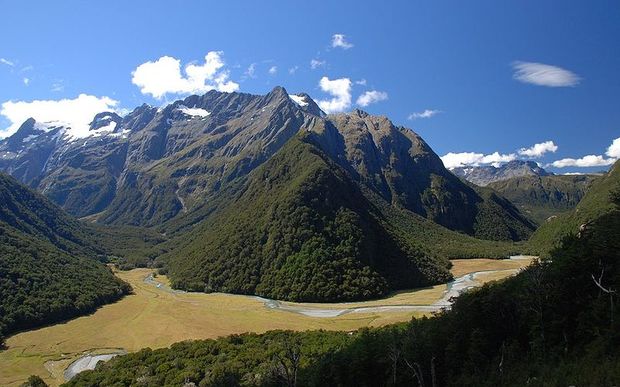 A view from the Routeburn Track in Fiordland National Park. Photo: WikiCommons

Steve Norris, who ran a professional guide service on both tracks, said he had noticed comments about the number of people using them.

"We've had the odd comment over the Christmas-New Year period, where it was quite noticeably a lot busier this year, where people thought that 'oh, didn't realise it was going to be quite this busy'," he said. "They anticipated it being busy but not quite as busy."

The Department of Conservation (DoC) was aware of the problem - so much so that there was pressure to keep the summer tramping season going as long as possible, extending into the colder months when the risk of avalanches increases.

Helen Dodson, who looked after the DoC track booking system in Te Anau, said walkers were told about the risk.

"We're upfront with people when they come to pick up their tickets, which they pick up one to two days before they go on the track.

"We'll say to them, look there's an avalanche danger on the track at the moment, we have to fly over that section, we have to ask that you have to pay for that flight - if you don't want to pay for it, we'll fully refund your booking."

Literally just down the road, however, the town of Tuatapere was struggling to find enough customers for the Hump Ridge Track - even at the height of the season. 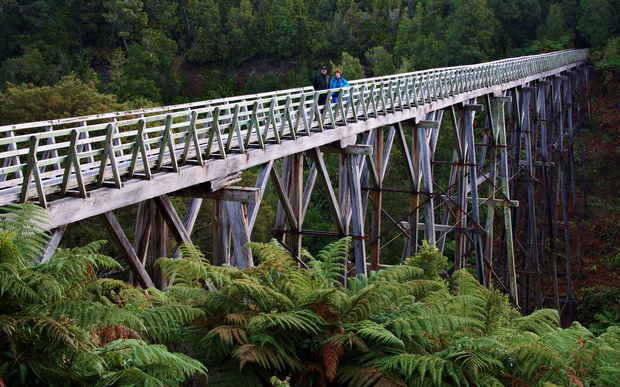 A pair of walkers cross the Percy Burn Viaduct on the South Coast Track near Tuatapere. Photo: Tomas Sobek / Flickr / CC BY 2.0

Money might have something to do with it. The top-of-the-range guided walk cost over $1800 a head, which track manager Cedric Wedderburn said was affordable.

"There's plenty of people that would pay that. That's at the upper end of the market. We also cater down for the independent walker, at $175."

Even at $175, there was still the cost and challenge of getting to Tuatapere, something that Venture Southland tourism manager Warwick Low conceded was an issue.

"There's a variety of things. If we're talking over in western Southland, Tuatapere - amazing sausage capital of New Zealand, but epicly beautiful access into some amazing tracks over there like Dusky and Borland and the Hump Ridge... but it is right at the end of the tail."

The Department of Conservation and Venture Southland were not the only ones worried that some tracks were overcrowded while others remained underused.

Ultimate Hikes runs private lodges on both the Milford and Routeburn - accounting on the Milford Track for half of the 14,000 walkers each season.

Its general manager, Noel Saxon, said the company was actively looking for new tracks to develop.

"There's plenty of good tracks around this country - well-known, and we've got a product we know works, and we'd be happy looking at some other locations."

While market forces might help decide how the massive demand for tramping gets redistributed, it appears it will only happen if people get off the beaten track and discover the country's less famous adventures.