A woman who jumped into one of Gisborne's best-known swimming spots without realising it was contaminated with E coli is demanding better warning signs. 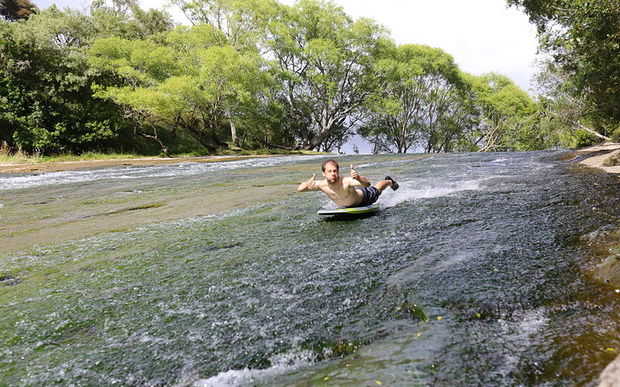 A photo posted in January 2014 shows a swimmer sliding down the Rere Rockslide, in Gisborme. Photo: Wikicommons / jmc226 / CC BY-SA 3.0

Water testing at the Rere Rockslide in the Wharekopae River often shows levels of E coli and faecal coliform due to farm run-off further up the catchment.

The rockslide, which is listed in the AA's "101 Must-Dos" in New Zealand, is a natural rock face in the river that people slide down.

Caroline Wood and her family took a trip to the rockslide during their summer holiday. There was a sign saying the water might pose health risks but she said more should be done if the E coli readings were high.

"There was loads of locals and tourists there. It looked like fun so we hopped in but it wasn't until later, when I checked on the website, I realised people shouldn't be going in."

Ms Wood checked the water test results on the Gisborne Regional Council's website. "I was horrified. It said code red for E coli and that no one should be in the water." 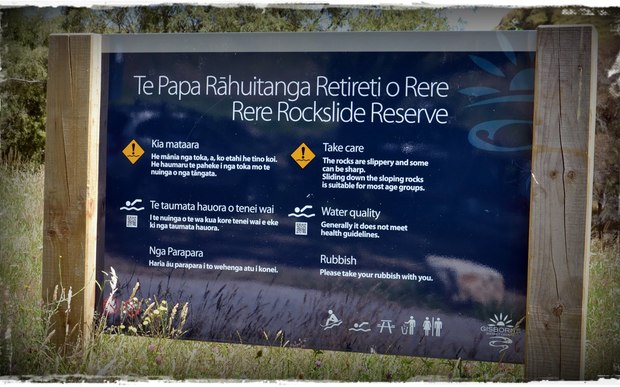 A warning for slippery rocks - but Ms Wood said not enough was being done to warn people about E coli. Photo: SUPPLIED

The sign that stated the water quality might not be up to health standards was not good enough, she said.

"It is advertised everywhere for tourists but they are not told to check on the council website. You can't do it when you're there because there is no cellphone coverage.

"It's one of the top tourist attractions in Gisborne, it's on the AA's top 101 things to do in New Zealand, it is number two on TripAdvisor. If the water isn't clean, I would expect for signs to be up quite prominently near the water stating test results have shown E coli, go in at your own risk."

The council tested the water on a regular basis and the results had been similar for many years, he said.

"The upper catchment is all farmland, so we have all of the farm and rain water running into the river, and that's why it has higher E coli levels."

Mr Foon said the council was working with farmers to improve the health of the river.

"We've had meetings with farmers to discuss what we can do. We are looking at planting along the river, which would catch some of the run-off before it goes into the water."

Mark Gemmell has farmed 7000 beef cattle and sheep alongside the river since 1977. Farmers were actively working with the council to formulate a plan to keep the river clean, he said.

"If the council did more monitoring of the tributaries where intensive grazing happens, they would be able to determine where the contamination is coming from."

Stock was fenced off from the river so any run-off would be coming from streams on farm properties, Mr Gemmell said - and he had never been sick from it.

"This summer, we've been swimming in the river twice a day. We have been for years and we've never been sick. I have no worries about it at all."

Farmers and the council would be meeting again soon to discuss more monitoring and planting along the river, he said.