Sealord factory cleaner Victor Norman is no stranger to company restructuring - he's been through it four times in 10 years. 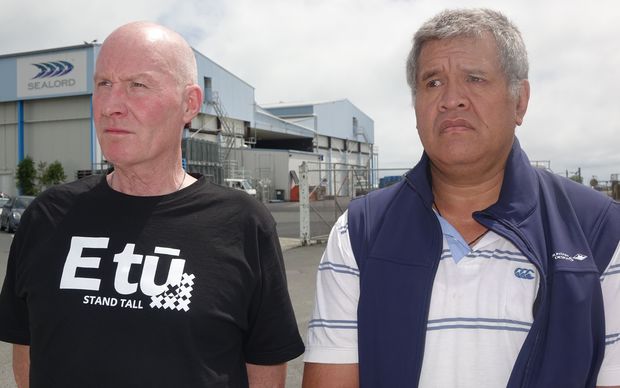 The Nelson based international fish processing firm announced last week it planned to cut more job cuts in an effort to rein in falling sales of its crumbed hoki product.

Up to 60 processing, cleaning and salaried jobs could go from one of factories in the plant at Port Nelson.

A staff proposal that was to have been delivered to the company yesterday has been put off until Friday, to allow employees more time to fully consider their options, the union representing them said.

Mr Norman said it was now the fourth time he had been through the process since he moved to Nelson in 2006, after Sealord closed its Dunedin factory. He had been with the company since 1994 and was lured north by the promise of work until retirement.

He was also the union delegate and while his own job was safe for now he said it was heartbreaking watching people go through it all again.

"We went through the same a year ago. We were lucky - there was supposed to be 70 people who were supposed to lose their jobs but it was brought right down. People who left, left because they wanted to go. I feel sorry for the people who stayed because we're going over it again," Mr Norman said.

Sealord announced last week it planned to stop production of its Kirimi fish bites products because of commercial pressures, mainly from cheaper offshore production of competing products. The company said in a statement that those products had seen a continued downward trend over recent years and forecast sales volumes were down 38 percent on last year. It said those losses were not sustainable.

"The big problem here is that we are allowing our fish to go offshore to be processed in China and undercutting jobs here in New Zealand - it's total nonsense," Chas Muir said.

"Sealord's hoki customer can get a cheaper final product because our exporting rules are not set up to best help the New Zealand economy. It's cheaper and easier for many fishing operations to make a quick buck flicking off fish for processing in China."

Sealord is owned by Aotearoa Fisheries and Japanese seafood company Nissui. The company has processing plants around the world and processed 220,000 tonnes of fish and shellfish each year. It holds about 19 percent of the total fishing quota in New Zealand.

It said the Kirimi production line had been under review for the past 12 months. A sweetener is that 15 new fish processing roles might be established in its wetfish factory. Mr Norman said it was some comfort for those seriously worried about their futures, but it was not nice asking workers to draw straws. The workers getting close to retirement were being encouraged to take the offer of redundancy.

"If things go well, hopefully everyone who wants a job will get a job and people who want to move on or retire have the chance to do that."

Mr Norman said the problem was also linked to changes in processing, including factory trawlers where fish were processed at sea. He said the decline in shore based jobs was bad news for a city like Nelson.

He said Sealord could not compete with labour costs overseas, but its point of difference had always been its ability to keep innovating.

"In the past I've seen Sealord, the unions and staff work really well together to come up with a better solution, and that's about 'what can the leaders do to say to our customers in Europe and America - we've got some really great, world class skills in our region, let's do some of that work back in Nelson'," Mr Smith said.

Sealord said it remained committed to processing in Nelson and was optimistic about the continued growth of its fresh fish business.