Aspiring novelists and poets converged on a remote Kapiti Coast campsite over the weekend to gain inspiration and knowledge from published writers including a man described as a blues poet. 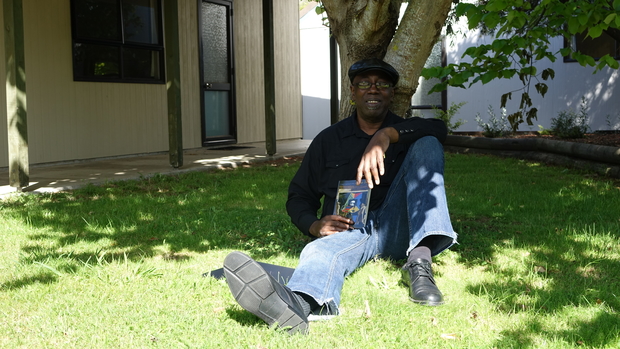 About 50 up-and-coming writers lived and breathed the trade at beach side Waikanae.

He was one of six established writers who held workshops at the inaugural Kapiti writers' retreat.

At his workshop, he said being a "poetic witness" was similar to being a social justice conscience, which was why people had dubbed him a 'blues poet'.

"I spent a lot of time working against hunger and poverty issues and those are the same people we know as a blues theme, that's where it grows from.

Mr Lilley said the Kapiti Coast was inspiring him.

"I saw a tree up here that had shoes nailed into it, that means something to me, and then I heard that it's called the tree of souls, it's going to turn up somewhere in my work," he said.

Her workshop was based around nature writing, in other words, the environment.

She explained how a writer kept the creative juices flowing after being published several times over.

"The key to not getting stale and not running out of things to work on yourself is to really push your reading, so not always reading the same material, but being adventurous in what you read so that you have the capacity to be surprised and challenged and reading things that make you want to respond in some way," she said.

Nicola Easthope from Raumati South has a poetry collection, Leaving my arms free to fly around you, published and has another manuscript in progress.

She is also a high school teacher and said a writer never stopped learning, which was why she wanted to mingle with many unpublished writers all weekend.

"A lot of gifts, everyone's got life experience, views and world views, different perspectives to share and there's something really magical about being an emerging poet, or someone just starting out as a novelist who is really at the guts of their ideas," she said.

The writers' retreat attracted those aged in their 20s to 60-plus.

Gayna Vetter is from North Dakota but lives in Wellington, and at nearly 60, she has been studying writing and plans to release her first novel soon.

For her she said writing was more of a need to do, than a want to do.

"I have actually in the last two years while I've been doing this, I've never felt so good and I know I'm doing the right thing, so for my retirement, I don't have to quit working," she said.

This was the first Kapiti Writers' Retreat and organisers hope to be back with another workshop next year.