It's summer, BBQ season, and yet dramatic scenes unfolded yesterday in Canterbury as a tornado, lightning and hail struck. Unusual for this time of year? Not really, forecaster Tony Trewinnard says. 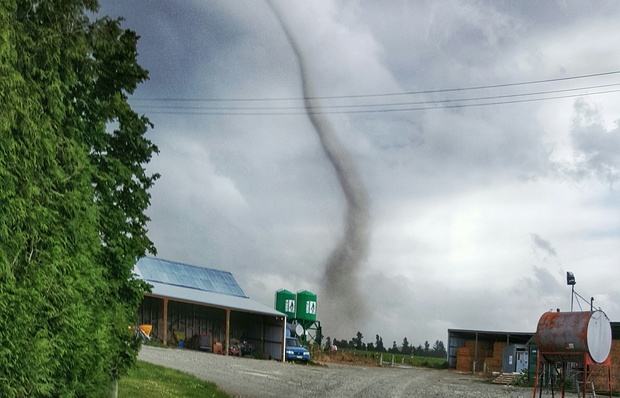 The storm ripped through the region yesterday, starting fires, overturning silage wagons, flooding some areas and cutting power to 5000 properties in Rolleston and Leeston.

Mr Trewinnard from the Blue Skies Weather and Climate Service in Christchurch said tornadoes and thunderstorms are more common when there are patterns of south westerly air flow.

December is the wettest time of the year for Canterbury and the conditions were right for a thunderstorm, he said.

"Although these storms don't occur every year - and I don't think they're necessarily becoming more frequent - they are more frequent when you get a strong El Niño event, and that's what we're seeing at the moment."

People may be gaining the impression big storms are more frequent, because of online communications including social media, said Mr Trewinnard.

"It's easier for people to look at a video on the internet and say 'wow there certainly was a funnel cloud in south Canterbury this afternoon - look at it go'.

"Whereas perhaps 10,15, 20 years ago you were reliant on someone having observed it and reporting it later on, which didn't always happen of course."

MetService forecasters knew that the conditions were going to be right for a storm in the weekend, but it was really hard to pinpoint where this type of storm would hit until it had formed, he said.

Casey Sparrow manages a dairy farm in Carew, south Canterbury, and was loading up the silage wagon yesterday when his afternoon took an unexpected turn.

"I had the bale set on the ground next to the wagon and I was just out cutting the strings off them and I heard a bang and saw [the tornado] coming toward me at the end of the silage pit - about 50 metres away. 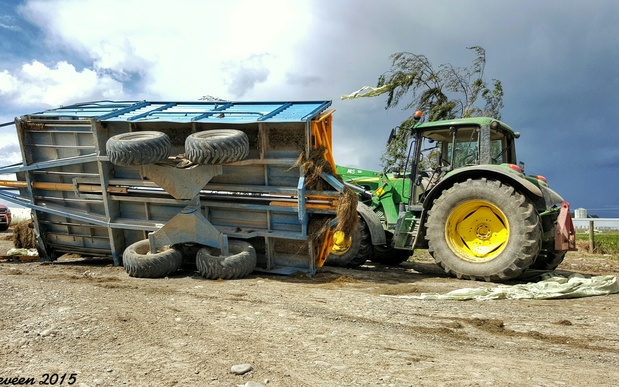 "So I saw it and just ran as quick as I could into the shed next to me and by the time I got in there and turned around it was right outside the shed, probably about 30 metres away."

For a moment, he thought it might've been the last time he ever loaded the silage truck.

"I saw the skies go black and thought 'oh yea that will be a thunder storm', I didn't expect that.

"I was crouched over sort of covering and I thought 'geez if this goes over the shed I'm going to be done for."

Mayfield farmer Phillippa Fleming also saw the tornado and compared it to a big Nike tick and said it lasted about five minutes.

"There was a lot of thunder and lightning and we looked over and there was like a Nike kind of symbol in the sky and it just came down and touched the ground over to the south.

"There was quite a lot of dust and debris around the bottom of it, it looked quite cloudy and very scary," she said.