Hundreds of passengers have had their travel plans ruined by strong wind gusts which have forced the cancellation of nearly 20 flights into and out of Wellington. 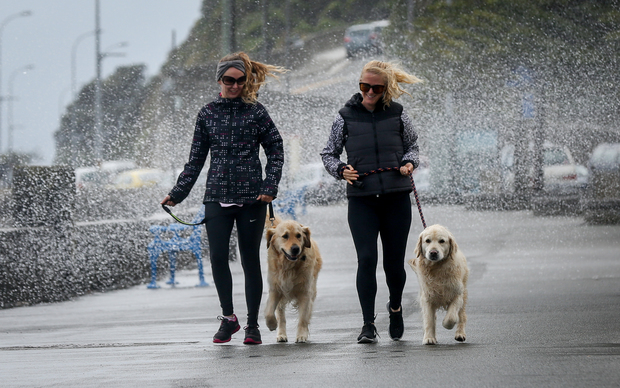 Metservice has warned that a "very active front", preceded by an unusually strong and moist north-to-northwest flow will cross the South Island and lower North Island today.

It has sparked a severe weather warning, with severe northwest gales expected to hit Canterbury, Marlborough, Wellington and Wairarapa.

The severe gales - which could see gusts of up to 150km/h - were expected to ease from the south as the front moved northwards. Winds in excess of 130km/h were recorded in Wellington this morning. 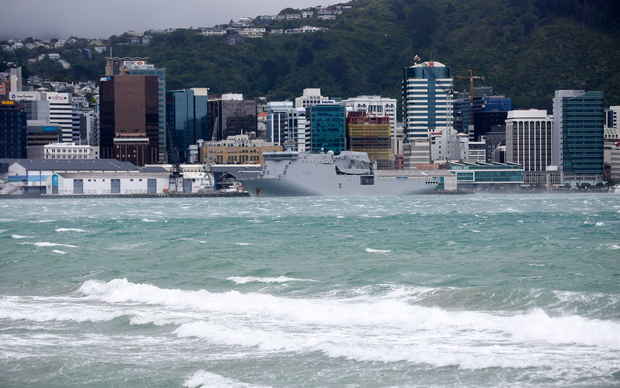 Waves on the Wellington foreshore were whipped up by the winds today Photo: RNZ / Alexander Robertson

A Wellington Airport spokeswoman said the wind was causing problems, with flights from Napier and Christchurch diverted to Paraparaumu and Palmerston North respectively. A Hamilton flight had also been redirected to Palmerston North.

Others, including flights from Christchurch (x2), Palmerston North, Rotorua, Gisborne, Tauranga, Hamilton, Blenheim and Queenstown (x2) had been cancelled. The winds had also resulted in six flights leaving the capital being cancelled and a number delayed.

She said international flights had not been affected. The airport was advising passengers to check its arrivals and departures online or to contact their airline directly.

It’s unsafe to open the hold to get out the luggage. Oh Wellington, how I’ve missed you. #smrtgirlstrip

Heavy rain has also been forecast for Westland and the Tararua Range.

Heavy rain in Westland is expected to ease later this afternoon, but another 100 to 150mm could accumulate around the ranges. Between 70 and 100mm could fall in the Tararua Range this evening and Saturday morning.

MetService said this was a significant weather event and urged people in the affected areas to exercise extreme caution.

"Rivers and streams are likely to continue rising, and there could be surface flooding. Also, winds of this strength can topple trees, powerlines and irrigation systems, and can make driving extremely hazardous, especially for motorcycles and high-sided vehicles." 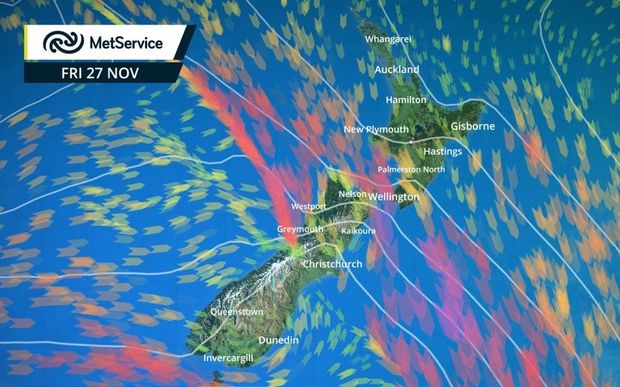 Gale winds force winds that have been forecast for parts of the South Island & lower North today. Photo: Metservice

The strong winds have already caused damage in the lower South Island. Severe weather and high winds have caused power outages on the Aurora Energy network, in parts of Central Otago and Dunedin overnight.

High winds have caused damage to power poles and caused trees to clash into overhead lines.

A Delta spokesperson said crews responded overnight by restoring power where possible and repairs recommenced this morning at daylight.

8:30am update: NW winds gusting 110km/h in Wellington, a stunning 27 degs in Kaikoura, just 11 in Dunedin with a southerly

Power is out to consumers in Wanaka, Dalefield, Lake Hayes, Lake Hayes Estate, The Neck and Makarora, Cardrona, Closeburn and Glenorchy, Springvale and parts of Alexandra.

In Dunedin crews are clearing a large tree in McMaster Road in order to restore power.

The spokesperson said crews were working hard to restore power to remaining consumers as soon as possible and the safety of the public and line crews is of primary importance.

Further north, 50 firefighters, 13 tankers, 10 earth-movers and 10 helicopters are still battling a large blaze which is being fed by the warm weather and strong gusts in the Waikakaho Valley, north-west of Blenheim.