Six weeks after a Forest & Bird video revealed Northland native forests dying of neglect, the Department of Conservation (DoC) has admitted it has no plan or budget to save them and no intention of asking the government for more funding.

DoC manager for Northland Sue Reid made that clear this week to a meeting of the Northland Regional Council's environment committee. 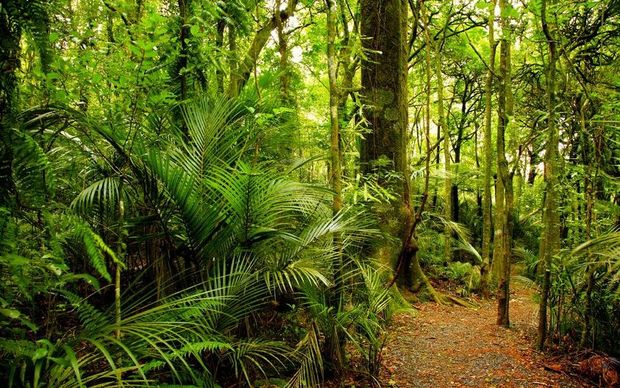 The committee watched a short film made by Forest & Bird, with drone footage of DoC forests most of which have had no pest control for two decades.

The film released in October showed ancient trees that form much of the forest canopy reduced to grey skeletons.

Committee members commented that the situation was dire and the only realistic remedy was 1080. And they offered to support DoC in a joint approach to the government for funding for aerial drops of the pesticide. 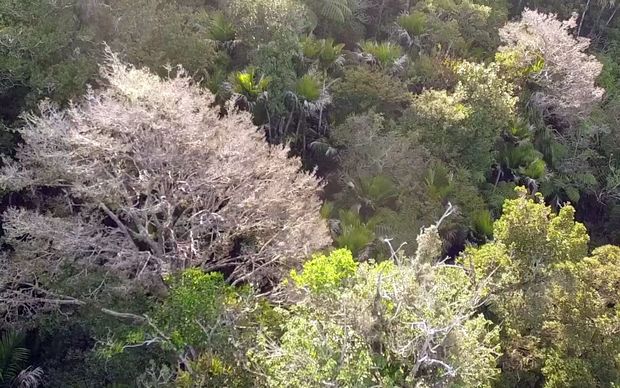 But DoC representative at the meeting, Sue Reid, declined the offer.

"We know that 1080 aerial drops are the most cost-effective tool but it's often about what support we have for that from the community," she said.

"We have to show what we will achieve within our current budget, and it is not sustainable to just go cap-in-hand to the government for more money."

"DOC should be adopting a more "can-do" approach," he said. 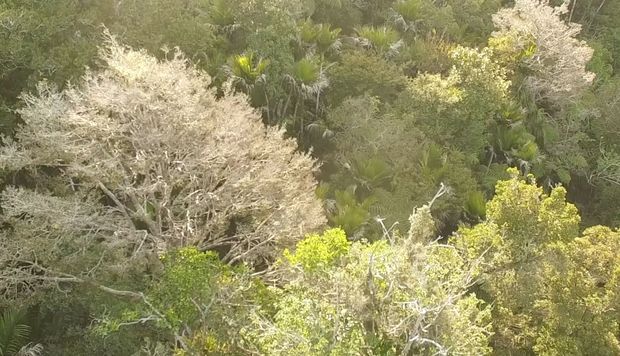 "DoC needs all the help it can get, and it needs to work with the Northland Regional Council and anyone else who is friendly enough and has the insight to save these forests" he said.

"It's not going to cost all that much, but we do need a funding increase, to stop the forests collapsing completely."

DoC and Northland Regional Council are the only two government agencies that fund possum control in Northland.

The council subsidises work done mainly by Landcare groups and some individuals, and more recently charities such as the Tindall Foundation have been supporting those efforts.

But the council bio-security manager Don McKenzie said the work was being done mainly on private and council reserve land, while supposedly protected forests in the conservation estate were abandoned to their fate.

He said the Crown was not pulling its weight.

"In the 90s and early years of this century there were regular 1080 drops, but since then there've been very few, and it shows.

"It's ironic that we've got more than a hundred voluntary Landcare groups in this region all doing brilliant pest-control work, while the jewels in the crown, the DoC forests, are dying because the government's not doing its share. "

Mr McKenzie said it was disappointing to hear DoC declining an offer of partnership with the regional council to tackle the problem, because such partnerships, involving iwi as well, were the best hope of saving Northland's forests. 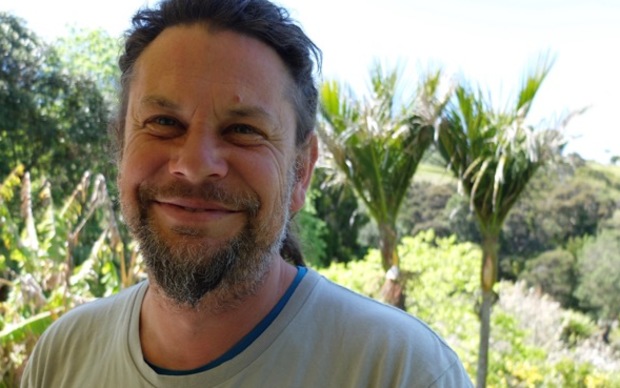 In parts of the country where TB is rampant in possums and wild pigs, the Animal Health Board, now called OSPRI, has traditionally funded pest control to stop the disease spreading to cattle, and native forests in those regions have reaped the benefits.

But not in the sub-tropical north, where the possums enjoy rude good health and breed at least twice a year.

That is because Northland farmers managed to eradicate TB in their herds before the pests arrived in the 70's, and they've never become a vector of the disease as they have in places such as Waikato and the West Coast.

And that means the region has never been eligible for much in the way of pest control funding from OSPRI.

With no DoC plan in sight for the forests, and no budget for the work, the regional council would appear to be the last man standing capable of funding 1080 drops, but chairman Bill Shepherd said the council and the ratepayers could not afford to do DoC's job for it.

"It's quite a vexed question, because on the one hand the forests can't afford for us not to do it," he said.

"But in terms of affordability for the ratepayers it would cost tens of millions of dollars. And a 1 percent rate increase nets us only about $130,000."

DoC's Sue Reid maintained money was only part of the problem.

"Say we had $15 million that we could use for aerial 1080 across Northland, there's a lot of communities that would have a problem with this, for valid reasons," she said.

"They have concerns about their waterways, concerns about other animals that might be affected by 1080; it's a matter of building their understanding about that."

Chair of the council's environmental committee Joe Carr said community opposition to 1080 was a complication, but was not insurmountable. He said a recent team effort to save Warawara forest in Hokianga was a stellar example of what could be achieved when DoC, iwi, charities and the regional council worked together.

Like most DoC forests in the north, Warawara is surrounded by private and Maori land.

Where landowners do not agree to use 1080 for the initial pest knockdown, DoC can not make a case for funding. Even if it wiped out the possums on its own forest, the pests would quickly reinvade from surrounding private land.

But Mr Carr said the kaitiaki of Warawara, Te Rarawa had consulted intensively in the past three years with hapu about the options to save their ancestral forest, and finally agreed to aerial 1080 drops, followed by ongoing trapping.

The funding came from DoC, the council and the Tindall Foundation.

Mr Carr said while Warawara was a success story, it was the exception, and other forests such as Herekino were dying because local communities were set against 1080.

"I've got friends who are passionately against 1080 , and I've got to say that most of them have a vested interest," he said.

"They want to see their favourite pests thrive in the bush. It's the pigs; and in other parts of New Zealand it's the deer. but I think in Northland with the collapse of our forests, we've got to work out, do we want a pig farm and a possum farm, or do we want our bush? "

Forest & Bird estimates it would cost up to $20 million over 10 years to save Northland's forests, using aerial 1080 drops and follow-up pest control.