An iwi says it is concerned about how often 1080 will be dropped on the Hunua Ranges, southeast of Auckland, to combat a major rat infestation. 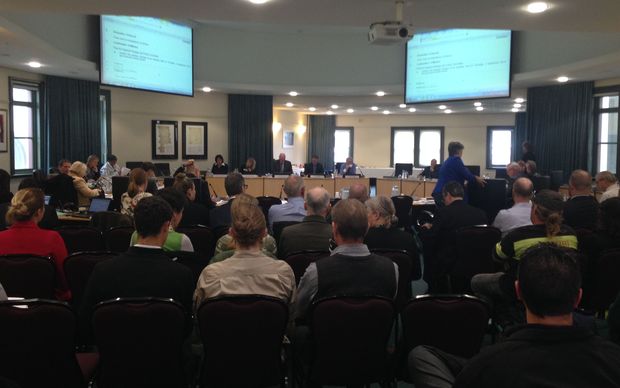 No public seating left at Auckland Council meeting on whether to drop 1080 in the Hunua Ranges. Photo: RNZ / Murielle Baker

The drop is scheduled for late July or early August, and may continue on a regular basis. But Ngāi Tai ki Tāmaki Tribal Trust wants more clarity about what Auckland Council terms "pest control and management".

Trust chair James Brown said the iwi was not consulted until after the decision had been made.

"So from a starting perspective our starting position is almost one of 'suck it up' because the decision-makers have already made a decision."

He said although the tribe was slightly disappointed with the council approach from a relationship point of view, "we'd have to admit at the official level there's been quite open and regular dialogue subsequent to the announcements".

Mr Brown said the tribe did not want it to be up to the council to drop 1080 whenever it liked, and it would prefer to have an eradication programme as that would mean there would be an end point. 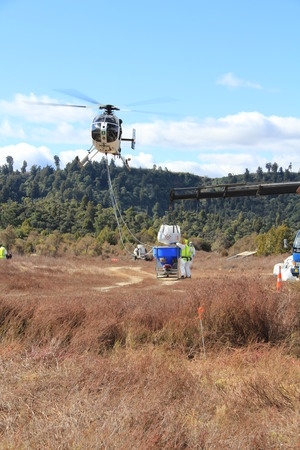 Mr Brown believed alternatives had not been properly explored and he was cautious about endorsing the amount of 1080 to be dropped.

"Their view is it's huge it's 17,000 acres' and our view remains you can still do this. It's just hugely expensive, but we will not just sit on the sideline and allow this term of 'pest control and management' to be a tool and instrument where folk who we rely upon say to us, 'aw look, another infestation, let's dump another 10 tonne.

"Our view is ... if we're in that space we will not permit you to have this bottomless pit that you can just tip down when you feel like it under the auspices of an intensified period and infestation of pests, whether they be rats, stoats or cats."

He said the term 'pest control and management' also meant there was the potential for massive amounts of 1080 to be dropped frequently in future, and the iwi was not prepared to support that plan indefinitely.

"We haven't quite yet accepted that it's as intensive as folk are suggesting it is.

"Right now there are elements of the proposal where we're all reliant on supposed experts who are making these statements through 'measured analysis'. The bottom line for Ngāi Tai is that it hasn't yet itself gone and confirmed those statements [are true], at least within its own properties in the Hunua."

Mr Brown pointed out that Auckland Council has asked landowners in the Hunua Ranges if they want 1080 dropped on their land, however iwi owning whenua had not been asked.

Mr Brown said the iwi was involved when 1080 was used to eradicate rabbits on Te Motu o Ihenga in the Hauraki Gulf and that experience taught them there was always a risk to health.

"There was a waterway involved there in terms of the Waitemata and Hauraki Gulf, and we can categorically attest there is one element that the pilot [of the areoplane] does not control, and the experts and iwi - and that's wind speed and wind direction on any given day.

"So the safe zones that we stood in on the island were not safe, the Waitemata Harbour which was apparently protected from the drop was not protected, so we've experienced this first-hand."

The iwi wanted to see the Hunua Ranges given the same status and importance as Bledisloe Wharf, where expansion plans have been stymied by public opposition.

"The iconic landscapes we look at as being both the same, the decision-makers involved are both the same, and the impacts in our case would be worse than the wharf scenario."

The iwi leader said if the authorities were not prepared to change their approach to the use of 1080 then the tribe would have to reconsider its stance.

"If they're not prepared, or have an appetite for that, then we need to prepare quite strongly now a platform, if not to explore the alternative, certainly to prepare a form of opposition that is strong enough to have them reverse [their decision], similar to what they seem to be doing with the wharf."

Mr Brown said the iwi was looking forward to meeting the council and mayor about the issue.

The council did not respond to a request for comment.