Tomorrow marks a week since a helicopter crashed on Fox Glacier and, now the [http://www.radionz.co.nz/news/national/290592/last-bodies,-wreckage-lifted-off-fox-glacier victims' bodies are recovered, the focus has turned to the cause of the crash. 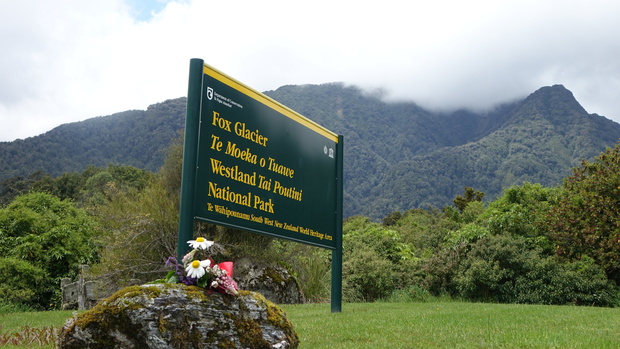 A single bunch of flowers by the entrance to the Fox Glacier. Photo: RNZ / Sally Murphy

The AS-350 Squirrel helicopter was taking six tourists on an aerial tour of the glacier when it crashed into a crevasse.

The Transport Accident Investigation Commission (TAIC) is conducting final interviews in the Fox township today, before it investigates the wreckage.

The seven people on board the flight were: Andrew Virco, 50, and Ms Walker, 51, from Cambridge; Nigel Edwin Charlton, 66, and Mrs Charlton, 70, of Hampshire; Sovannmony Leang, 27, and Ms Gibson, 29 of New South Wales; and New Zealand pilot Mitch Gameren, 28.

They were out exploring what the West Coast is known for - alpine glaciers.

TAIC now has the task of establishing what went wrong.

Spokesman Peter Northcote said after the three remaining bodies were recovered yesterday the wreckage was also brought off the glacier.

"Until it's gone through an inventory we won't know everything we've got, we're quite satisfied that we've got the major physical components of the aircraft that would likely be of interest to us."

Alpine Search and Rescue's Marius Bronn said working to recover the bodies and helicopter wreckage from the glacier was extremely difficult.

He said the ice was like 'popcorn' as well as being steep, slippery and unstable.

The wreckage is now being trucked to Wellington where it will undergo a detailed examination.