A speed management project being piloted in Waikato could clear the way for more express journeys through the region.

Work is carried out on the Rangiriri section of the Waikato Expressway. Photo: Supplied / NZTA

The project will analyse the region's roads to identify safe speed limits, and could recommend boosting the limit on the Waikato Expressway.

The Waikato region has the highest road toll in the country, with 55 deaths so far this year.

Factoring in loss of life, loss of output medical, property damage, legal and court costs, those deaths came at an estimated social cost of $219 million. 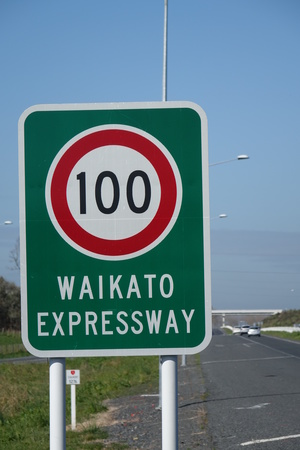 The region's transport committee chair, Hugh Vercoe, said some country roads were not safe at 100 kilometres an hour - while sections of the new expressway, which will link Auckland to Cambridge, could be suitable for a higher speed limit.

"We're saying what is appropriate, and if the Waikato Expressway, with its four lanes, with separation in the middle, is 100km/h, is that the safe speed limit?

"That may be part of the discussion and we may well say that could go to 110."

Automobile Association motoring affairs general manager Mike Noon agreed the expressway was being built to a very high standard and could operate safely at 110km/h.

"Many of those roads will be running pretty much at 110km at the moment when they're uncongested, they'll be running very close to that," he said. "But, of course, those people are currently speeding."

But Waikato also had a lot of heavily trafficked roads that posed a high risk, he said.

"With a lot of entrances often off the road, maybe ditches, poles along the side of the road, lifestyle blocks, wineries or businesses.

"That may currently have a 100km limit, and it could well be that a safer limit for that road is 80."

The agency's road safety director, Ernst Zollner, said it would identify which Waikato roads did not fit its draft management guide, which outlines optimal speeds for different types of roads based on safety, travel times, and fuel efficiency.

They would decide what action was needed, which might not always mean a speed change, he said.

"In some cases that might mean treating the road, so maybe the speed limit may be fine but people are not reading the risk right.

"So it may be a nice straight road through the Waikato but it has no shoulders and a dangerous ditch, so we can do something to kind of explain that better, whether it's signage or doing something to the road."

The draft management guide has identified that a 110km/h speed limit could be justified on the country's best roads, and the Waikato Expressway could be a candidate - although it would require a law change, he said.

She said the aim was to help people understand road risks through signage, road markings and engineering improvements.

"Ensuring that the network can do what it is designed to do and that's move people from A to B.

"And I think that it is fairly important that we do that so we support the economic growth of the region and nationally, and also most importantly from my perspective that people do that safely."

The pilot project should be completed by the end of 2016 and then be rolled out nationwide.