After about $6.7 million and two-and-a-half years, the project to repair Christchurch's iconic Triumphal Arch is complete - but it's not yet open to the public.

The public will not have access to the well-known heritage site until at least the end of summer while another project nearby is completed. 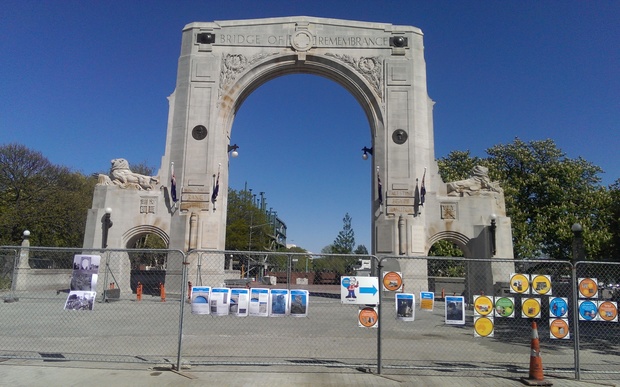 Christchurch's Triumphal Arch was built in 1924 and damaged in the 2010 and 2011 Canterbury earthquakes. Photo: RNZ / Belinda McCammon

The category one heritage structure - made up of the Triumphal Arch and the Bridge of Remembrance - replaced another bridge in 1924. It followed a letter written by a resident to the local newspaper in 1919, suggesting a memorial to soldiers from the Great War.

The arch and bridge, which have been cordoned off since the Canterbury earthquakes, have been part of a technically challenging restoration and strengthening project. 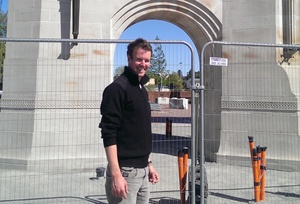 Stronger Christchurch Infrastructure Rebuild Team (SCIRT) site engineer David Kennedy said he might have worked on one of the most challenging jobs yet, comparing the restoration to open-heart surgery in terms of the precision required for the job.

No more than 10 people were able to work on the structure at any one time, power tools were limited and heritage rules had to be followed.

He said the job was nerve-wracking. "In terms of precision engineering, it was at its limit.''

The restoration work means that the arch will now rock with any seismic activity rather than twisting on itself, which it had been doing.

Original piles, which were only four metres deep when the memorial to honour those who fought in World War One was opened on Anzac Day 1923, were replaced with new piles driven to 27 metres, to a layer of Riccarton gravel.

Opening date not yet set

The original cost of the restoration was $4.47m but it wasn't until the design team were able to see the extent of the damage that the real cost, now closer to $7m, was known.

It's a figure that Christchurch City Council infrastructure rebuild general manager John Mackie said was fair, given the resilience that the structure now has and the engineering that was carried out.

After the Canterbury earthquakes, it was deemed unsafe and engineers began to discuss how to tackle the repairs.

While the work on the arch and bridge is finished, the structure is in the middle of the Canterbury Earthquake Recovery Authority (CERA)'s Avon River Precinct project.

Mr Mackie said he hoped the site would open up for ceremonies and services commemorating the Great War in the near future, and he was putting pressure on the authority to ensure it happened sooner rather than later.

"The next phase of the Avon River Precinct work CERA have advertised for tenders just last week. That is regrettable that will be following on from behind the repairs to the arch," he said.

"We expect work to start on that early in the New Year. I've asked CERA if it can prioritise the bridge work ahead of the other work, so we can look at getting this asset back to the public.''

Mr Mackie said the teams who worked on the project, including stonemasons, designers and engineers, have ensured it will remain standing for centuries to come. 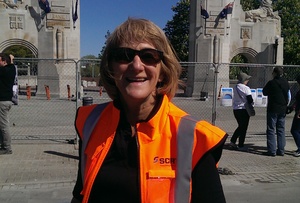 Ros Service worked on the project in her communications role at project leader Downer.

In the early days, she said, soldiers marched from Christchurch's King Edward barracks through the arch on the way to catch the train to Lyttelton so they could jump on the boats to go to war.

To repair the arch, designers had to go back to the same quarry in Tasmania where the stone originally used to built it was sourced.

Every piece of the arch has some symbolism to it, Ms Service said.

The arch, which faces east to west, marks the arrivals and departures of the soldiers and includes carvings of rosemary for remembrance.

But it is the structure's two lions, which were cut into sections and removed from the site during the restoration, that she found most fascinating.

"The lions are a symbol of the British Empire and they're sitting on top of spoils of war."

A CERA spokesperson said, with the strengthening of the arch and bridge foundation structure complete, it could now carry out its work there as part of the Avon River Precinct, including features such as steps, ramps and paving.

The spokesperson said the bridge was expected to be open again at the end of summer.