Submissions on the Wellington supercity close on Monday but critics say there has not been enough public debate and the proposal is doomed to fail. 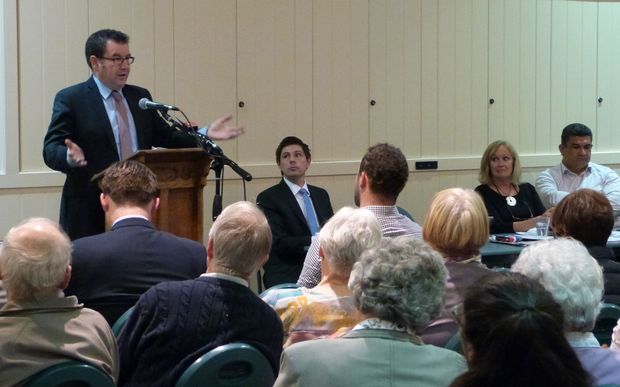 A poll this week found only about a quarter of residents surveyed supported the Local Government Commission's plan to merge all nine councils from Wellington to Kapiti Coast and Wairarapa.

About 100 people turned up to a public meeting co-hosted by the Labour and Green parties last night.

Wellington Regional Councillor Sue Kedgley, a former Green MP, questioned whether there was any desire for change.

"If you think about, there isn't really any widespread dissatisfaction with the way most of our local councils are performing," she said.

Ms Kedgley said projected savings in other council amalgamations, such as Auckland's supercity merger, had failed to materialise.

The estimated cost of setting up a Wellington supercity had blown out by 13 percent to $210 million.

Under the proposed model, Ms Kedgley said, local democracy would be undermined by impotent local boards.

"They are there to consult with and represent the views of the local community, which is great - so far, so good," she said.

Wellington city councillor Paul Eagle said although some sort of change was both wanted and needed, the Local Government Commission's proposal would fail.

Mr Eagle urged the commission to adapt the proposal before it could be voted on.

"In terms of community views, yeah there's a case for change around some improvements," he said.

But there was "no support for the proposed model."

"Should we hold a poll? What we [Wellington City Council] are saying is that would be a total waste of time," he said.

He believed one council for the Wairarapa, and one or more for Wellington, the Hutt Valley, and Kapiti could receive greater community support.

Commercial lawyer and former ACT MP Stephen Franks said under the amalgamation, the resources of well-managed councils would end up subsidising other areas for no net benefit.

"They go on and say that the solution to all of these problems, which are supposed to be looming, is amalgamation," he said.

"Well, there's only one reason why that's a solution, that's because they think somewhere in that community is a Father Christmas who'll pay for the rest that they think can't pay for themselves."

Wellington Central Labour MP Grant Robertson encouraged the audience to submit their views to the commission.

"I've got some views about what could happen in local Government," he said. "I've got a view about what might happen in the Hutt, but actually that's up to the Hutt to decide.

"I've got a view about what should happen over in Wairarapa, but actually that's up to the Wairarapa people to make that call."

Lower Hutt's mayor, Ray Wallace, said the councils already worked together and a supercity was not what the region needed.

Residents have until 4pm Monday 2 March to make a submission.