A sign purporting to advertise the Cricket World Cup matches at Hagley Oval with an obvious spelling mistake in the heading has turned out to be a hoax.

A picture of the large colourful banner, appears to list the tournament matches that will be played in the city, with a headline above boasting "See The World's Greatest Inaction at Hagley Oval''. 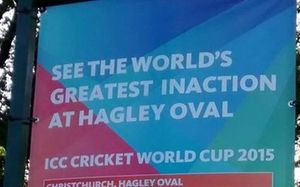 A Christchurch City Council spokesperson says the picture has been photoshopped and is a hoax.

The picture has been making the rounds on social media this morning.