Fire crews are battling to gain the upper hand against a blaze that has spread over more than 300 hectares in high country near Arthur's Pass in the South Island. 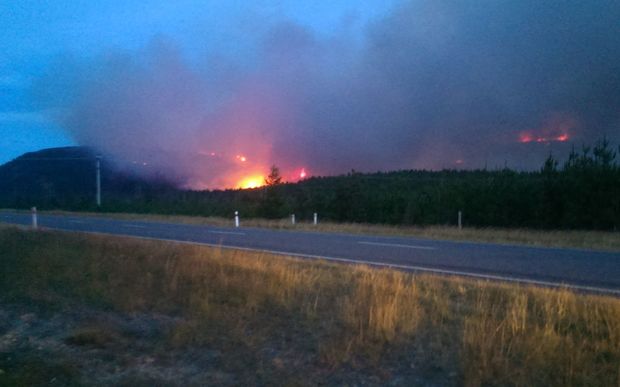 The fire burned throughout the night. Photo: RNZ / Patrick Phelps

The fire, which has been burning since yesterday, has been described as being the size of 300 rugby fields - and there is a warning it could threaten native species and recreational facilities such as skifields and lodges.

The fire is raging in bush and scrub on the Flock Hill Station side of State Highway 73, opposite Craigieburn Forest Park.

The Department of Conservation (DOC) said, fortunately, it had not yet crossed into the park where there were heavier and more flammable fuels.

DOC fire spokesperson Craig Alexander said keeping the fire out of that area was a priority.

"There are kiwi and various other species and plants on the other side," he said.

"[It's a] conservation estate but it's also a recreation area with ski fields and the infrastructure for those, as well as educational resources in there."

The blaze started on Flock Hill Station at about 2.30pm yesterday and by this morning had burned through more than 300 hectares.

Helicopters dropping water from monsoon buckets and planes dropping fire retardant are battling the blaze from the skies for a second day.

Radio New Zealand reporter Patrick Phelps said yesterday's strong winds had disappeared and a light south-easterly breeze had come up, which should push the fire back if it continues.

He said firefighters had been getting water from Lake Pearson - which is quite a long way from the fire - and they have now set up two emergency dams, and filled in a creek to build up a reservoir, to try to build up water supplies closer. 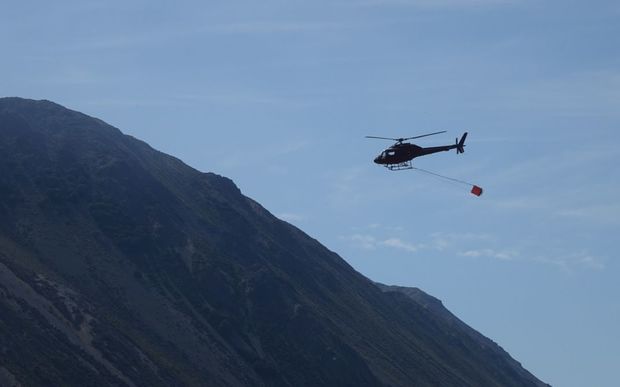 The fire is raging on the Flock Hill Station side of State Highway 73, opposite Craigieburn Forest Park. Photo: RNZ / Patrick Phelps

Incident controller Bruce Janes said it had taken a lot of helicopter time filling monsoon buckets at Lake Pearson and he hoped the new reserves would speed things up for pilots.

"To make it more efficient and to make it more effective, the Cave Stream's been very gently blocked to allow us a dipping point for the helicopters without buggering up the streambed," he said.

"We've also got a 15,000-litre dam in, being pumped out of the same creek further up to supply water, and we're going to put another one in."

An evacuation plan for people living in Castle Hill village had been put together in case north-west winds flared up.

Mr Alexander said earlier today that the fire was still not under control. 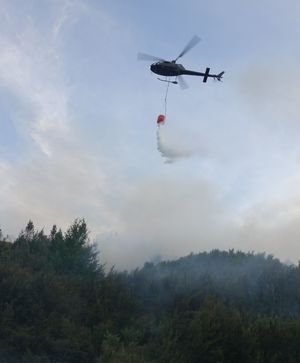 "We've had a huge number of fires across the region so far this year, exceeding numbers for other years, so it's just been a matter of time before something like this happened."

He said water resources were limited in the area and many streams had dried up.

"Yesterday was a bit like chasing a rampaging bull, it was moving from one direction to the other."

Seven helicopters and four planes were being used today to douse the fire.

Six to eight crews were on their way from as far afield as Franz Joseph and Timaru, to help the 25 firefighters from DOC, the Fire Service, Selwyn District Council and crews.

DOC has said it will take several days to control the fire and possibly weeks to extinguish it.

People living near the fire say trees have exploded and ash has been coming down on their roofs.

Terrie-Ann Dean, who's staying with her family at a Castle Hill bach, told Radio New Zealand's reporter at the scene they're very worried about the fire spreading, after seeing a tree explode.

"We've got a black roof here and, as you can see, there's quite a bit of ash," she said.

"The worry to us is that if there's sparks in the ash, there's not a lot we can do about it. We haven't got enough water here to fight it."

Local builder Phil Marsh said he had seen several fires in the area over the years and this one would be hard to put out.

"Normally, it's just a few days and then just dampening down - but it's such steep terrain where they're going to be," he said.

"It's going to take quite a bit of time with the machines - you know, the helicopters and the planes - just to get that really soaked. Because we all know, you can think you've got it out, and then the wind picks up a day or two later and she's embers up and boom, she's gone again."

However, Mr Hill told Morning Report he would be keeping an eye on the wind today. 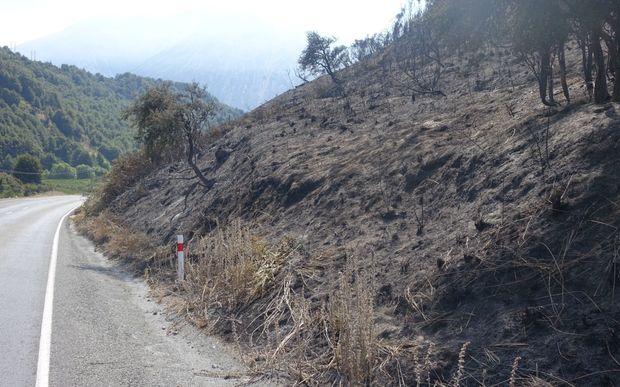 The scene of the fire near Arthur's Pass, opposite Craigieburn Forest Park. Photo: RNZ / Patrick Phelps

The area has been hot and dry for months, leaving parched manuka, matagouri, and gorse scrub, along with massive areas of pine and beech forests.

He said the fire had grown because of a lack of water sources last night.

Yesterday changing winds pushed the fire from one direction to the other, making it difficult to contain.

State Highway 73 was closed at times, causing big delays for drivers travelling between Canterbury and the West Coast. Vehicles were being escorted through by roading contractors overnight.

Sheep were moved to safety yesterday and the Fire Service was dipping monsoon buckets in nearby Lake Pearson to help extinguish the fire.

The focus was on preventing the flames from reaching beech trees in Craigieburn Forest Park. 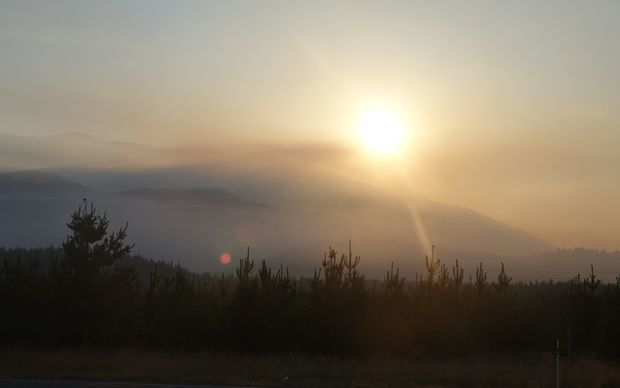