Canterbury firefighters are hoping for cooler weather after two fires yesterday, including one that threatened homes west of Kaiapoi. 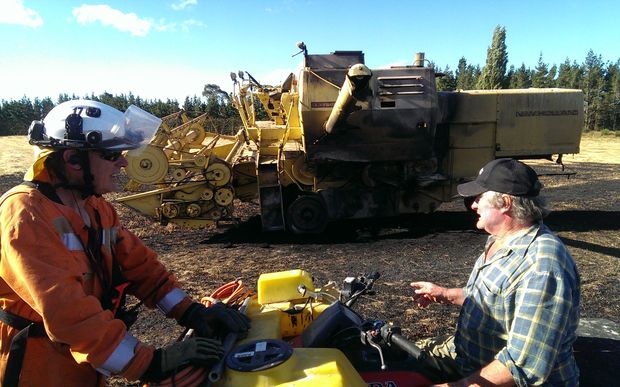 The mid-afternoon blaze came within 100 metres of two homes and followed another early yesterday morning caused by a camp fire at Spencer Park.

Volunteers at the Swannanoa Fire Brigade have received a call-out every day since New Year's Day as the region bakes in temperatures pushing past 30 degrees.

The farmer whose combine harvester sparked the fire at Swannanoa, west of Kaiapoi, said it was a freak accident.

Mr Manion said he noticed the flames coming from the header's engine when they were too high for him to do anything but call for help.

While he waited for firefighters to arrive, he tried desperately to prevent the flames from spreading, but was helpless due to the strong winds and tinder dry conditions.

The fire raced towards the home Janine Harris shares with her husband and four children.

She and her husband used irrigators on their lifestyle block to slow the fire's progress to within 100 metres of their house.

Ms Harris said adrenaline got her through.

"I wasn't thinking I was just trying to save the shed and the house. We were told we might have to evacuate but I was pretty happy it wasn't going to go near the house."

Her husband Joseph said after losing their home in the Christchurch earthquakes they were determined to hang on to this one.

Twenty fire engines and two helicopters with monsoon buckets had the blaze under control before nightfall.

Paul Fiddymont from the Swannanoa Volunteer Fire Brigade said the area was the driest it had been in seven years and there had been an callout every day this month.

Meanwhile, a fire yesterday that burned two hectares at Spencer Park, north of Christchurch, is being blamed on a camp fire.

In Marlborough, a large scrub fire that destroyed some 50 acres of grassland in the Dashwood Pass, forced the closure of State Highway 1.

Another blaze, in Grovetown, north of Blenheim, delayed the Coastal Pacific passenger train from Picton with 110 passengers on board. They were spending the night in Blenheim and being taken to Christchurch today by bus. Today's services were running as scheduled.