Scientists say it could take hundreds of years to reverse any of the damage to the Fox and Franz Josef Glaciers brought on by climate change. 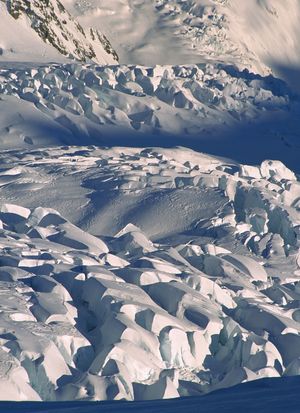 The West Coast attractions had retreated rapidly over the last five years, and tour-operators could no longer take punters through on foot.

Until a couple of years ago people could walk straight up to the Franz Josef Glacier, and before April last year it was the same on Fox Glacier.

The ice had been melting since 2008, following decades of steady growth.

But it was now back to historic lows and that meant it was too far, and too dangerous to make the trip by foot.

"We've had a reduction in our revenue. Obviously the flying only access is a higher price point and some travellers budgets can't quite stretch that far," he said.

"That's certainly meant that we've seen a bit of a reduction in numbers."

Glaciologist at Victoria University's Antarctic Research Centre Andrew Mackintosh said on current predictions the glaciers would become even smaller, harder to get to and less spectacular.

He said glaciers naturally advanced and retreated but they were now doing so faster - and humans were at least in part to blame.

"That includes a natural component, and it includes a human component. Answering that question is never completely straightforward but the changes we've seen recently have been so large and unprecedented that it's very likely it's had a... human element."

Another glaciologist at the Research Centre Brian Anderson agreed things were not looking good for the two West Coast glaciers.

He said undoing the damage caused by humans would be a hard task.

"There will be short-lived readvances because that's what [glaciers] do, but overall it's going to retreat," he said.

"Certainly in this century we're not going to be able to pull it back. It's going to take a sustained effort over quite a few centuries... to bring the temperature back to the level it has been in the last century."

Department of Conservation's conservation services manager for the area Wayne Costello said those tourists heading in for a closer look could also learn an important lesson.

"It's a place that's a really visible example for us to look at what is happening as a result of humans looking at the planet," he said.

"Maybe it's a way in which we can engage with your everyday person to say, well we have to think about how we're living our lives differently."

Mr Jewell said he was hopeful the tide would turn for the glacier and they would be able to get groups through on foot again in the future.

But glaciologists said on current trends, the helicopter tours were likely to be a long-term fixture.