A rescue attempt to re-float a dozen stranded whales at Farewell Spit has been abandoned after fading light made the operation too risky for volunteers.

Water from the high tide had just re-floated the pilot whales before 50 volunteers and Department of Conservation staff had to leave them late on Tuesday night.

"It was getting to a point where we had to bring our staff and volunteers out of the water. So at that point, the whales were floating and pointing in the right direction."

The whales had spent about nine hours lying exposed on the beach after 13 out of a pod of about 50 became stranded about 11am.

The efforts of DoC staff and volunteers meant only one died from exposure. Mr Napp said the whales that survived have a reasonable chance now that they're in the water again.

"They're swimming, they're in water that's deep enough they can go out. They could easily disappear and we'll never see them again or they could equally be back here in the morning."

Mr Napp said DoC staff would return to the beach about 5.30am on Wednesday.

Earlier in January, 39 pilot whales were stranded at the base of Farewell Spit. Twelve died, while the others had to be put down. 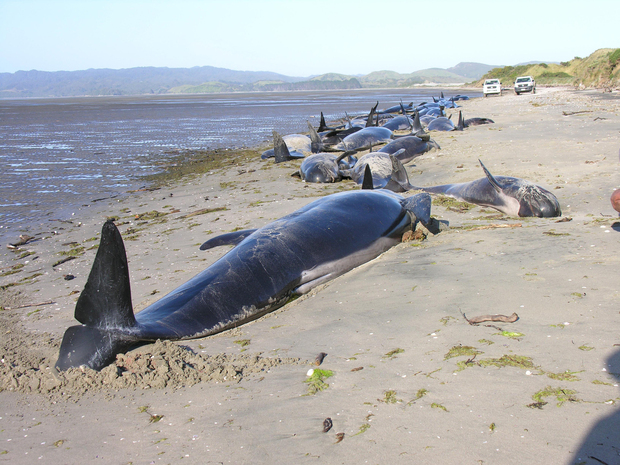