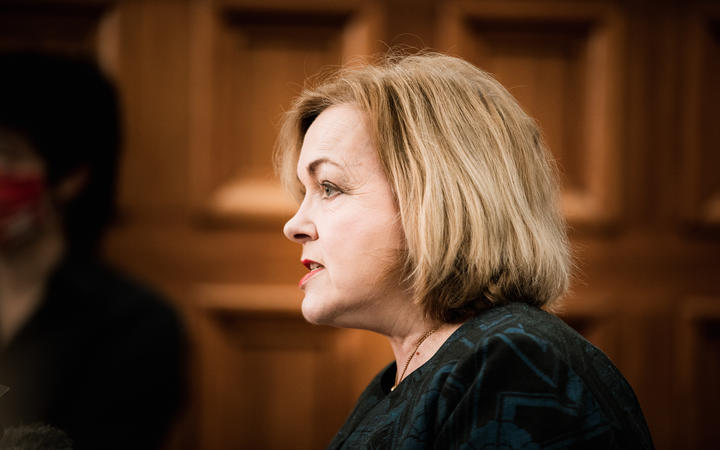 Ardern yesterday revealed Auckland would remain in alert level 3, step 1, while Northland would move to alert level 2, and signalled the government would reveal a Covid protection plan on Friday.

RNZ understands ministers were expected to consider a traffic light-like system New Zealand could move to once the population is highly vaccinated.

Collins this morning said the prime minister had ducked accountability at a time when New Zealanders - particularly in Auckland - were desperate for a way out of lockdown restrictions.

"Rarely in my time in politics have I witnessed a more shambolic, pointless and insulting press conference from a prime minister than we all saw yesterday," she said.

"When all people wanted were answers she gave us nothing, just vague hints that something is coming. She treated New Zealanders - all of us - like children, instructing us to be patient while we wait for our presents."

Collins said the delays in rolling out rapid antigen and saliva testing showed the government was making it harder for New Zealanders to have confidence that there was a plan, "because there is no plan".

"The prime minister is more concerned with patting herself on the back for the success of a vaxathon, an event she was able to fly a crew from Auckland to Wellington for, but not to ease the travel restrictions on anyone else - and in fact the prime minister has been missing in action for Aucklanders, she has not been back to our biggest city in almost 10 weeks."

She said the success of the weekend vaccination drive was good, but National was left out.

"It's a shame that the vaxathon, which we all supported ... that no opposition MP was asked to take part."

The National Party would also support any measures to improve vaccination rates around the country, including cash incentives or a lottery system, she said.

National released its own plan including vaccination targets about three weeks ago, and a traffic light system was part of that, Collins said.

She revealed they would also announce the next part of their plan, which she described as a "full mini-Budget" tomorrow.

The party's Covid-19 Response spokesperson Chris Bishop said the delay in setting targets would be incredibly frustrating for New Zealanders.

"Judith and I have asked the prime minister and [Covid-19 Response Minister Chris] Hipkins that repeatedly in Parliament and have issued numerous press releases, each time we've been told that we don't understand the realities of Covid, that the expert advice is that we can't set a target.

"Now we find out on Monday that there is going to be a target - but we're not going to find out what it is until Friday.

Bishop said the government also needed to provide clarity on booster shots, as those who were vaccinated six months ago will need them.