Cabinet ministers are considering alert levels today but also looking further ahead to a system New Zealand could move to once the population is highly vaccinated, RNZ understands.

Today's Cabinet is deciding whether Auckland, parts of Waikato and Northland are safe to move out of alert level 3, or have some restrictions loosened.

Director-General of Health Ashley Bloomfield told RNZ current modelling showed it would take Auckland just over a month before 90 percent of the population is fully vaccinated.

Just over 70 percent is now fully vaccinated, with close to 90 percent having had one dose.

There were 92 community cases over the weekend, five in Waikato and the rest in Auckland.

Of Sunday's 51 community cases, 23 were unlinked.

One is in Hamilton and one has an address in nearby Kihikihi, which officials say may have been the source of wastewater detections in Te Awamutu. 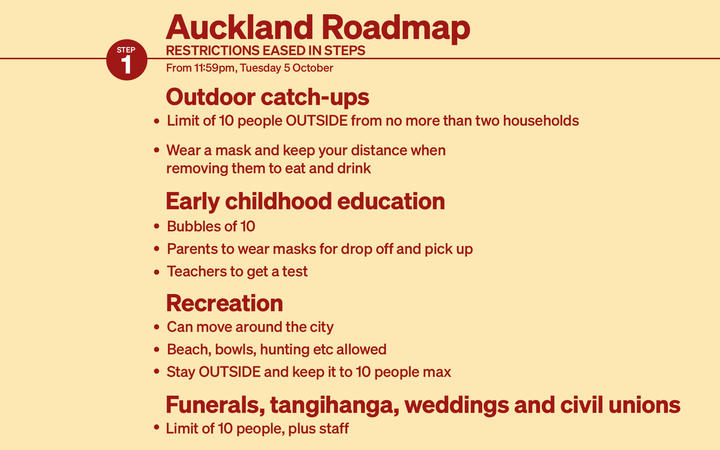 Auckland is currently at step 1 of alert level 3, that opened up people's bubbles, recreation and access to some early learning centres.

Prime Minister Jacinda Ardern has signalled a three-step system with no specific timeframes, but restrictions eased when considered safe to do so.

National leader Judith Collins said Ardern "must today tell the country the conditions and timeframe for ending the lockdown in Auckland and then she needs to get up there and see for herself the fallout from nine weeks of lockdown".

If it was true restrictions in Auckland wouldn't be eased until there was 90 percent double vaccination, which could take another month, the prime minister "must say so today and give Aucklanders and the rest of the country some certainty", she says.

"With speculation that the new stepped level system is to be dumped in favour of a 'traffic light' arrangement and experts calling for a return to level 4, New Zealanders are rightly confused and worried.

"It is also time for the prime minister to visit Auckland so she can see for herself the damage to lives and businesses the lockdown is doing," she said.

"Vax Bucks will reward New Zealanders for doing the right thing and following the rules. If you've had the vax and paid your tax, you deserve some relief," leader David Seymour said.

It would lower government revenue by $1 billion, he said, and mean fewer people ending up in hospital.