Political parties put their differences aside at the weekend for Super Saturday but now the pressure is back on the government to keep that momentum going and move away from lockdowns. 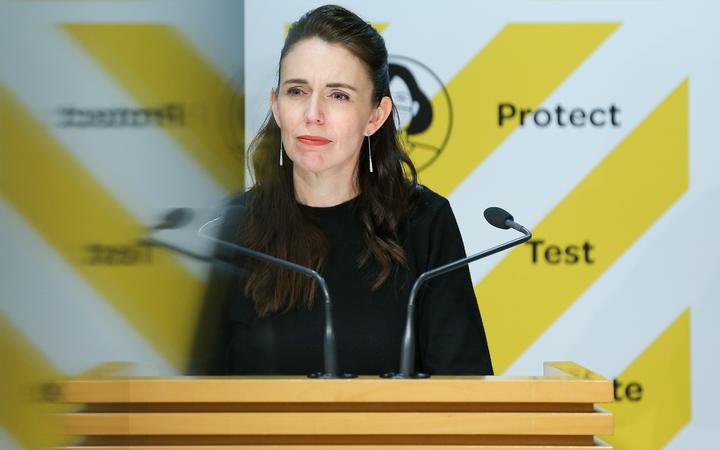 Prime Minister Jacinda Ardern will announce this afternoon if there are any changes to Auckland, Northland and Waikato's alert levels Photo: 2021 Getty Images

ACT party leader David Seymour said Super Saturday made very little difference to first dose figures and instead the government needs to give people a date that it will open the borders and ease restrictions.

"I dare say you'll get more people vaccinated with that approach than the current meandering approach," he said.

National's leader Judith Collins supported Super Saturday from the sidelines while in self-isolation, while her deputy Dr Shane Reti was on the front-line giving vaccinations in Northland.

She said the government needed to tell the public what its plan is once enough people are vaccinated.

"It's very important for there to be a plan for how New Zealand and particularly Auckland can reopen. We can't continue down a pathway where Auckland is going into a 10th week of now level 3 lockdown."

Saturday was the biggest-ever one-day vaccine boost among Māori, with more than 21,000 doses given - around half were first doses.

"We cannot let Saturday be a one-off incident, we have to continuously build on that momentum and be able to bend to what it is our dearest community needs," she said.

Ngarewa-Packer said their event in Taranaki had "vax and yax" tents, so that people could have a kōrero if they had questions or concerns.

One of the biggest pieces of feedback received from people who were unsure if they wanted to be vaccinated was that they couldn't trust the government and the current vaccine messaging was too centralised and judgemental, she said.

"We really have to change tack and be able to reach out in a non-judgemental way, in a way that is able to show that this is indeed a whānau environment, with whānau messaging, by whānau people, for whānau.

"That's a really important aspect, they've got to see our own faces."

Super Saturday highlighted what Māori providers can do to get people vaccinated, but they need more support, Ngarewa-Packer said.

The Greens' co-leader James Shaw also wants to make sure that resources are getting to the right places.

"In addition to continuing to push that average up and getting everyone that we can, we have to invest even more in those really highly targeted programmes; getting into the very remote parts of New Zealand, essentially going street by street to make sure people have access to it," he said.

Still lots of mahi to do on vaccination rates - Henare

Associate Health Minister Peeni Henare says the government would consider having another 'Super Saturday' and look at different approaches to targeting for Māori and resources to reach remote rural communities.

Henare said he was surprised a community trust in Tairāwhiti had started a Givealittle page for a mobile clinic as the government has allocated money for that type of need.

Te Aroha Kanarahi Trust has raised more than $100,000 since Saturday for a mobile clinic.

"I was in Te Tairāwhiti speaking to the Māori health providers on the Thursday and none of them mentioned it to me.

"I had a catch-up with them last night to say 'if this is what you need why don't you tell me earlier, we could have got this done'.

"We've got the team working on that one very quickly.

"We've allocated for the Māori vaccination programme over $80 million and that's what that money is for."

He said once alert levels changed whānau would want to head out of Auckland to see relatives, so measures should stay in place to protect other areas of the country.

"People from Tai Tokerau amongst other places have said they're waiting for a tidal wave, and what they mean by that is people leaving our main centre and heading to those places to see whānau and friends ... and that's a big risk."

Vaccination rates had to be as high as possible, and there was still "lots of mahi to do" in Te Tai Tokerau and South Auckland, he said.