Every time a potential law gets Parliament’s nod for further debate the public is asked to submit. That may seem very dominating but what MPs really want is feedback and ideas.

Typically Parliament gets 30,000 to 40,000 submissions each year. That advice is spread across 13 subject Select Committees and many dozens of bills, petitions, and inquiries.

But that number seems to be going up. You might say that New Zealand is getting more submissive (if the language can be tortured like that). 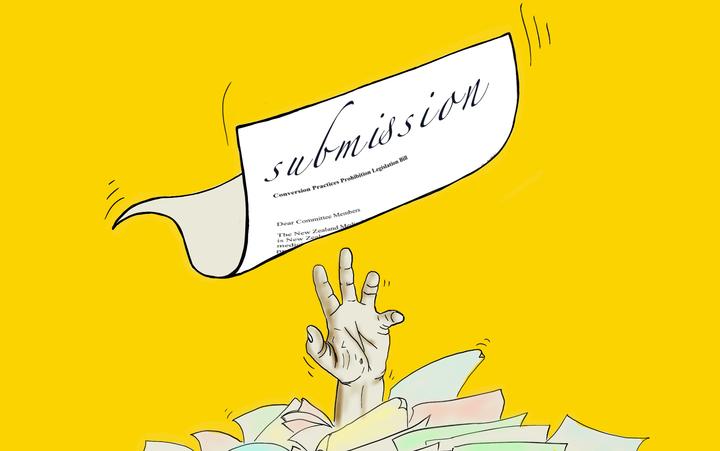 A tsunami of ideas

A couple of years ago people were astonished when the End of Life Choice Bill alone attracted more submissions than Parliament gets each year, a massive 39,159.

That bill smashed the records, but this year’s figures are scoffing at that record.

This year the Justice Committee is considering the Conversion Practices Prohibition Legislation Bill - a bill that would ban much of what some people call ‘conversion therapy’, or ‘praying away the gay’; attempts to alter a person’s sexual orientation.

The Bill has received 107,000 submissions! Nearly three times the record from just a couple of years ago.

And while that number is astronomical it’s not the only bill attracting a surprising amount of feedback. The Governance and Administration Committee is currently hearing submissions on an amendment proposed to the Births, Deaths, Marriages, and Relationships Registration Bill (which it already heard submissions on).

That amendment (SOP 59, which would allow people to alter the gender on their birth certificate) has attracted 6,984 submissions.

Even the less 'morally' contentious topics are getting people writing. The Water Services Bill received nearly a thousand submissions. That may not sound like a lot but in recent years other drinking-water related bills managed between 30 and 60 submissions, so 977 is quite a hop, skip and jump.

There is no certain answer to the increase in public responsiveness, but I suspect two causes have had an outsized influence: online participation has eased the act of submitting, and online committees have created an awareness of the possibility and of the process.

Here’s how those things have changed, to together spark the flood. 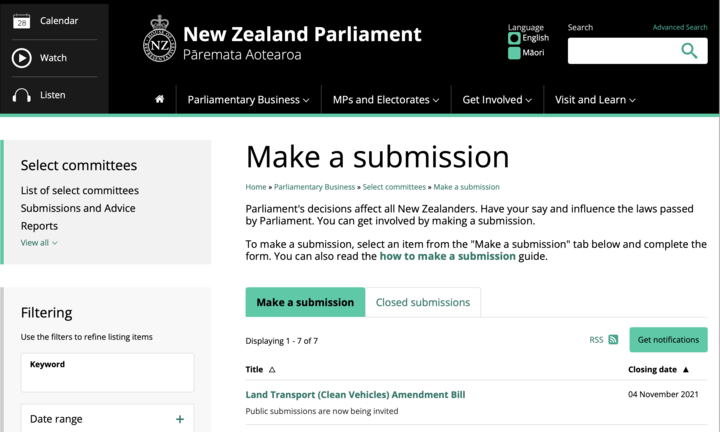 Online participation: the creation of ease

A recent petition urging the government to recognise the Myanmar opposition NUG as the legitimate government received more than half a million signatures! That is not normal. And that’s a petition that had little media attention.

Presumably the vast majority of those signatures actually came from overseas where despite cuts to their internet access the people of Myanmar have been making their voice heard.

Regardless of where the signatories were based, the fact that such large responses are even possible in a short time and without a huge campaign shows the impact of making participation easier.

Those changes happened during the previous parliament but have already become the dominant form of submission.

The Clerk of Committee for the Justice Committee, Dylan Hanna says that of the Conversion Practices Bill’s 107,000 submissions, just 35 arrived on paper in the mail. Not 35,000 - thirtyfive! That’s about 0.03% of the public advice.

He notes that’s likely an unusually low percentage, but it illustrates a huge shift. Just a few years ago every single submission would have required the personal possession of mysterious items such as stamps, envelopes, paper and a printer, and then a questing journey to something called a letterbox.

Surely the ease of making an online submission has increased the level of participation. But it hasn't worked alone. 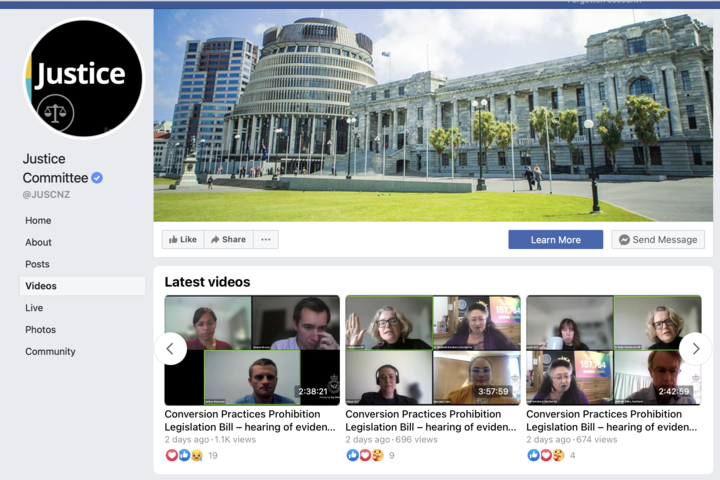 Online Committees: the creation of awareness

I suspect this second (more recent) development has aligned with the creation of ease to bring the public into the debate in numbers.

Over the last few years Parliament has been making it easier to participate in and recently, to watch Select Committee hearings.

Originally this move to video committees was aimed at making it easier for people to submit via video conferencing (rather than travelling to Wellington or using a terrible phone line).

That ability to connect was a good first step, but Covid-19 made teleconferencing standard and forced it into the wild. Parliament’s rules now allow committees to do business with the MPs as widely scattered as the submitters.

With Auckland locked down and Parliament’s Speaker running a very careful Covid response, Select Committees have been running online for months now.

But that’s not the crucial part, the crucial part is that because the Select Committees are using video conferencing it has also become easy to watch them - live or on-demand.

Just three or four years ago if you wanted to watch a committee you had to be in the room. And if you're never visited Parliament you likely had little idea of how submitting really worked. That uncertainty is a disincentive to participation.

During higher Covid-19 alert levels, when Parliament’s House couldn’t meet, various select committees took over the core role of government oversight, and did so live on Parliament TV with wall to wall media coverage.

Now the public can easily get a sense of what a select committee is and what it does. Submitting is no longer proffering an opinion to a black box.

Presumably this elevated public awareness has also elevated participation. Combined with the new ease of participation there are few roadblocks to submitting. 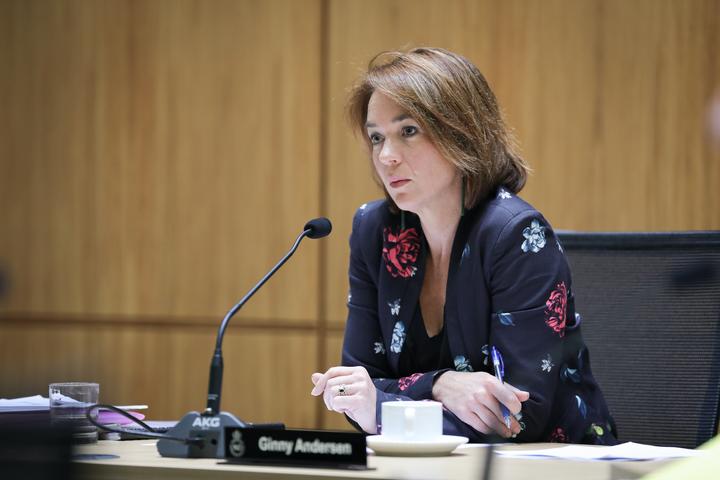 A rising tide lifts all bloats

The overall rise in submissions has also increased the number of 'empty calorie submissions', those submissions that add nothing to the committee’s knowledge. However, no-one seems perturbed about that.

I asked Justice Committee chair Ginny Andersen whether people that sent in submissions with only a statement of support or opposition were wasting the committee's time. She disagreed; "I think there's a value in democracy of people being able to have their say."

Such submissions do illustrate a misconception about the purpose of submitting - and of Select Committee inquiries. Some submitters think they are participating in something akin to an opinion poll, where winning a submission numbers battle (support v opposition) will sway the committee's outcome. It won't.

“Providing submissions is not a referendum, or a poll, or a vote. It’s a way for MPs to fully understand the depth of the issues, the contentious issues and to try and really get into the nitty-gritty of what the bill’s trying to do and how that might play out in future.”

So, while MPs are open to all opinions, submissions that don’t add anything to the debate are much less likely to influence the outcome than ones that deeply consider an issue's complexities, or bring real-world experience to the discussion. Those ones can identify unseen snags and barbs in a bill and get them ironed out.

Contentious, especially 'conscience issue' bills (those that touch on an issue some see as moral), are the most likely to attract those empty calorie submissions.

Partly this is because campaigners encourage ‘form submissions’ where people add their name to a submission-bot, or cut and paste a provided sentiment to email to the committee.

For example an online campaign against one current bill posted on their Facebook page: "Consultation closes tonight! Take 3 minutes now to say 'NO' to [...issue...] using the guidance on our website...[weblink]...Or go straight to the Parliament site now and write: "I oppose ...[issue]...".

A couple of weeks later on they announced the results of their own count of 'pros' and 'cons' amongst the submissions.

Such attempts to poll-stack the process with a slew of empty calorie submissions are not unusual for campaigners on either side of an issue - but they miss the point. Submissions are not an opinion poll - they are a contest of ideas. Bald support or opposition are not ideas.

But empty calories aside, there are always many thoughtful, considered, and well argued submissions on either side of an issue that genuinely add to MPs' considerations of how a bill should be amended before it goes back to the House for a second look.

Because that is the primary job of a Select Committee - not to accept or reject bills but to suggest whether and how Parliament might improve them.

And now it is much easier to help that happen, and we are doing it in droves.