Analysis - Auckland's outlook is bleak as cases surge and the government starts preparing for worst-case scenarios, hospitals get ready to deal with the crisis and home isolation will have to be used to help ease pressure on the already stressed MIQ system.

After mixed messages from the government last week about its Covid-19 elimination strategy, the virus delivered its own: forget it. 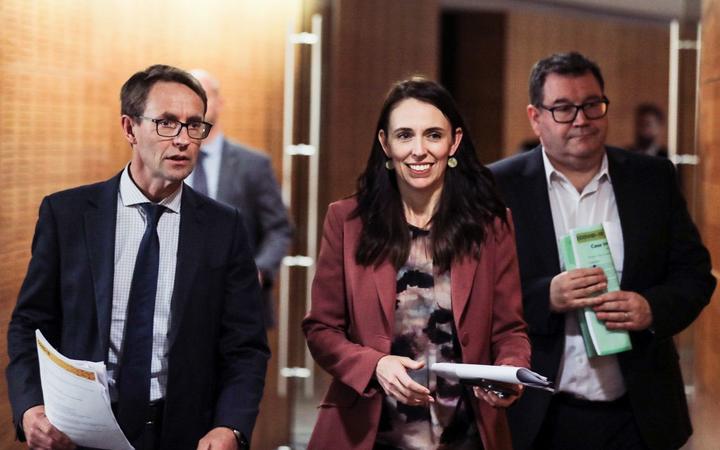 As cases in Auckland continued to grow and the number of unlinked cases increased, the city's bleak outlook and the danger to the rest of the country became clear.

"It's a question of time before we start to see cases popping up around the country and we need to be ready for that," Covid-19 Response Minister Chris Hipkins said on Newshub's AM Show.

After RNZ asked for the government's modelling, and was declined, Hipkins said it did not take a mathematician to understand that case numbers were doubling every couple of weeks and would continue to soar.

"That does lead you to an exponential growth curve ... there's no question we're going into a period where we are likely to see quite significant growth in the number of cases," he said.

On Thursday there were 71 new cases, 28 of them unlinked. Of the previous day's 55 cases, 21 were still unlinked.

Over the period of a few days, the government's messaging has changed from a determination to "stamp it out" to apparent acceptance that the Auckland outbreak can, at best, be suppressed to a level the health system can cope with.

The Herald's Derek Cheng said vaccination was now Auckland's only way out of lockdown, and he saw a problem with that.

"The prime minister has talked about leaving no group behind," Cheng said. "This means 90 percent of the eligible population (being vaccinated) means little if there are still pockets of thousands of unvaccinated people who would be in the virus' crosshairs at level 2."

Cheng said most of the suburbs where the virus was entrenched had first dose/second dose averages lower than the Auckland average (87 per cent/64 percent at the time of writing).

He listed eight suburbs with lower rates, saying it was known that the vaccination rates among young Māori and Pasifika - the groups that made up the majority of known active cases - would be lower than the suburban figures.

His report quoted Māori GP Rawiri Jackson: "It's right across Auckland. It's going to travel among younger people who are more social, more connected, and then it will land in houses of seven to 10 people."

Cheng said Aucklanders would be shielded from the worst impacts of the virus if they continued to follow the rules, and if the current momentum in the vaccination campaign continued.

"The consequences of either of those falling over is terrifying to contemplate," he said.

The potential for such consequences was set out in RNZ's report on moves towards home isolation for people infected with Covid-19.

"That modelling is based on a 90 percent vaccination rate, which those regions have not met.

"At even a fraction of those rates, quarantine hotels would be full to the brim."

The modelling was commissioned by the Ministry of Health. Its chief medical officer, Andrew Connolly, said at those numbers the vast majority of people would be asked to isolate at home.

"A lot of our work now is directed towards preparing for self-isolation or isolation within the community," he said.

Hipkins said home quarantine would be introduced sooner rather than later, describing it as a necessary step to prevent MIQ spaces from being limited even further for people coming to New Zealand from overseas.

Health Minister Andrew Little called a press conference on Thursday to give assurances about hospital preparedness.

"In terms of capacity to respond for additional patients, I'm confident that it is there and the planning is there to make sure we manage that carefully," he said.

Surge capacity for ICU-level care was up to 550 beds, but that would be at the cost of other treatment and patient care.

Middlemore Hospital had set up a triage tent as it prepared for an influx of new Covid-19 patients, RNZ reported.

Little did not think most people infected with the virus in the future would end up in hospital. "They'll be cared for in the community and the vast majority of them will recover at home."

While rates in most parts have significantly improved there are reported to be growing ethnic disparities.

A Stuff report said Pacific and Māori healthcare workers were "literally begging patients to get vaccinated".

It quoted Dr Maryann Heather of the Pasifika Medical Association, who said the last portion of the unvaccinated population was really hard to reach.

People were still suspicious and worried about the vaccine, she said.

"Some of us have resorted to begging. My colleagues are getting really tired. We don't want to overwhelm the hospital system."

Heather said misinformation and conspiracy theories were rife and feedback from those communities - particularly Pacific communities - was that churches did not trust the vaccine. That was compounding people's fears.

She said some people didn't watch the daily updates or watch the news. They relied instead on social media. "That's the problem, people are bombarded and some people are just over Covid. But we can't give up."

Cabinet will on Monday review Auckland's settings. It is still at level 3, having been brought down from level 4 on 22 September. Since then restrictions have been eased slightly, allowing limited numbers of families to mingle outdoors.

National Party leader Judith Collins wants to see the advice which prompted the government to move the city down despite new cases being reported daily.

At least one commentator has said it was a political decision taken to ease the pressure on Aucklanders.

Hipkins has said there was no evidence that the move caused cases to increase, and people were breaking the rules under level 4 anyway.

When Thursday's 71 new cases were announced, Deputy Prime Minister Grant Robertson said the spread was mainly through family gatherings indoors, against level 3 rules. He said the same thing had been happening under level 4.

The announcement on Monday that teachers and healthcare workers would have to be vaccinated indicated more stick and less carrot from the government as it strives to lift the rate and protect vulnerable sections of society.

Now that achieving at least 90 percent is the only way to get out of lockdowns the pressure is ratcheting upwards on those who aren't vaccinated. When the vaccine passports come on stream next month they could be widely used to restrict entry to gatherings and hospitality venues.

The worsening pandemic eclipsed most other political news this week but there were some significant events.

Treasury's accounts for the 2020-21 financial year showed the government's books in better than expected shape.

The deficit was $4.6 billion compared with the May forecast of more than $15b, tax revenue was up while expenses and debt were down.

"It shows a strong rebound from the first lockdown in 2020 and bodes well for emerging from the current outbreak," Finance Minister Grant Robertson said.

Climate Change Minister James Shaw released a consultation document indicating what the government's Emissions Reduction Plan, due in May next year, could look like.

"The sheer complexity of the estimates and projections means there is significant uncertainty baked in," RNZ reported.

The report described the reaction from climate activists as "a chorus of anger and disappointment".

The Talbot Mills Research (formerly UMR) poll put Labour on 46 percent, up one point since September, and National on 22 percent, down four points.

Seymour's rating as preferred prime minister was 16 percent, the same as the party's support level. That was seven points ahead of National leader Judith Collins.

Talbot Mills Research is Labour's pollster. The poll reported by the Herald was for corporate clients.