Where to from here for Auckland?

The government has held up a 90 percent vaccination rate as the key milestone to ease restrictions. 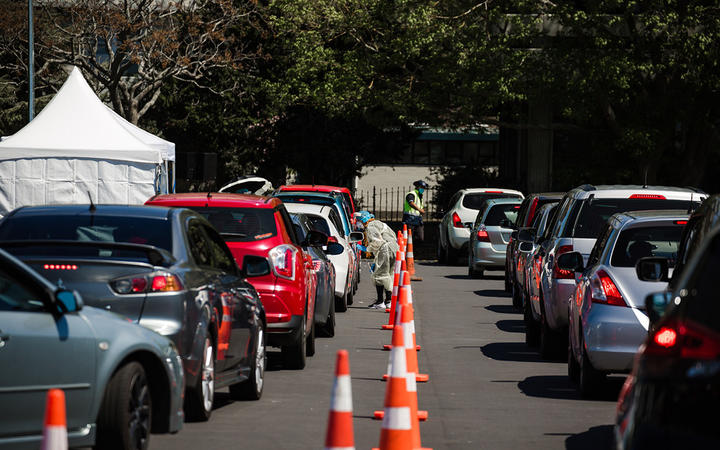 A big response from the community in Ōtara to the Super Saturday vaccination event Photo: Coconet TV / Penina Momoiseā

And now in Auckland 89 percent of eligible people have had at least one dose, but it would still be some weeks until the most recently jabbed people were eligible for their second.

Daily Covid-19 case numbers are rising, and 29 people are in hospital. But the Auckland of now is very different to two months ago.

When the first Covid-19 case of this outbreak was found on the 17 August, the vaccination rate was just 38 percent with at least one dose.

Now, 85 percent of people nationwide have had at least one dose, and 89 percent in Auckland.

So is that enough for Cabinet to make some concessions to the alert level restrictions today? Aucklanders were canvassed.

"I think we've got to be mindful ... that we need 90 percent of all groups, including Pasifika and Māori. I think that's really important. If we're not up to 90 with those groups, I wouldn't want the government to open up too much until we've achieved that," David said.

"I don't think the recent easing of restrictions has been that smart," Ross said.

"It's getting close to itchy feet season, coming into summer," Emma said.

Auckland is still 20,000 people short of 90 percent first dose coverage. Seventy-one percent of people have had a second dose.

The rest of the country is about five percentage points behind on each.

"We were given a target, and everyone's stepped up to the plate. Our country's been pretty good at pulling together, and now we want to reap the benefit."

Even if a vaccination target was reached, people are only considered fully immunised two weeks after a second dose.

If all the people who received their first dose on Saturday got their second as soon as they are allowed (with a minimum gap of three weeks) the government would not consider them fully protected for five weeks from now.

The 130,000 vaccinations given on Saturday was huge relief for hospitality worker Vajna, who has either been completely without work (in level 4) or disrupted (in level 3) since August.

It means her and her colleagues are a step closer to normality, she said.

"Such great news. It means we're finally going to get open, hopefully in the next couple of weeks, or maybe even next week. If we keep doing that - [vaccinate] those 20,000 more people - it'd be amazing for hospitality, for all of us to finally start earning money."

Some people in the city supported a gradual easing of restrictions.

A proof-of-vaccine for some things, they said, would both limit the spread of the virus, and incentivise vaccine uptake.

"I would like to think by December, if you'd like to leave Auckland you can, provided you're fully vaccinated and if you have to do a test," Dan said.

"I think they should bring in vaccination passports and open up the restaurants and trades to people who are double vaccinated, and the quicker we do that the better for the Auckland economy," David said.

"Start reducing the restrictions now, you've got until 1 December and then it's going to be open," Vicki said.

Auckland is currently at 'step one' of alert level 3 which allows a few more freedoms, including outdoor gatherings with one other household bubble.

Parks around the city were busy on Saturday with people picnicking and enjoying the sun.

Cabinet today decides if Auckland remains at step one, or moves down to step two - which is still within level 3.

This would allow shops to open with distancing and masks, and outdoor gatherings of up to 25 people would be allowed.