ACT leader David Seymour says the government's Covid-19 strategy is no longer viable, and is calling for an end to regional lockdowns. 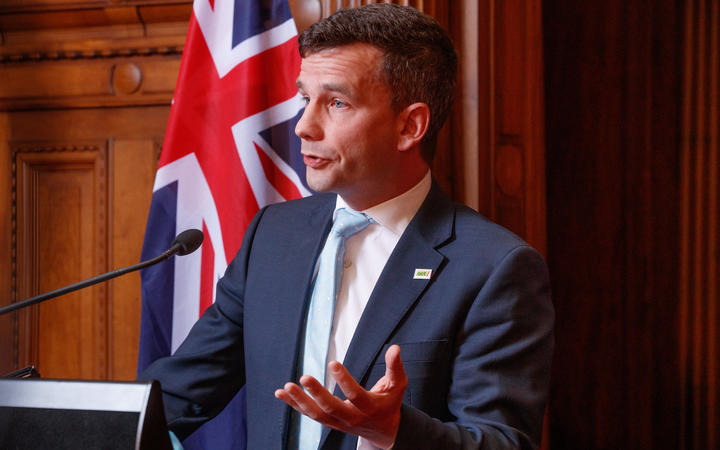 The party released its Covid 3.0 strategy this morning, saying that with the Delta variant the "eradication" strategy was no longer viable and urging five changes of focus for the government.

They included a recognition that the strategy could no longer work; a move away "from isolating whole cities to isolating only those who it makes sense to isolate"; a move away from "chronic fear and uncertainty" towards freedom; a shift away from government-knows-best towards openness; and an overall strategic shift away from public health to wellbeing.

New Zealand's elimination strategy aims to stamp out Covid-19 when it appears in the community, but Seymour said the government was instead pursuing eradication.

"We have pursued not an elimination strategy but an eradication strategy. The goal of government policy has been to have zero Covid so that after short, sharp lockdowns we could have long summers with no restrictions and that has been a successful policy apart from the fact that we've been cut off from the rest of the world.

"The problem is now the lockdowns are no longer short and sharp, and the periods of freedom I suspect would be shorter over time ... let's be clear, eradication is the policy that's been followed."

"It's no longer possible to live with zero covid cases in New Zealand, protected by our ocean barriers. We have to move on from that and go from eradication to harm minimisation. Some people would call that elimination but frankly I think for over 18 months now we've had so much confusion about that language."

It was time to start planning for life beyond lockdowns, he said, and called for the government to move up its timeline for opening up.

He said the question was whether everybody who was currently eligible had the chance to be vaccinated, and vaccinating everyone aged over 12 achieved the main goals of preventing hospitalisation and death.

"You're not going to have five- to 12-year-olds being hospitalised and certainly not dying from Covid ... they may have been in Fiji but again I don't think that's a reasonable comparison given Fiji's level of wealth and healthcare and abilities to battle any kind of epidemic. New Zealand is in a different league from them."

The party's document said new variants like Delta had made the strategy less effective, with growing costs, and said New Zealand should shift to instead focus on minimising transmission, hospitalisation and deaths "at least cost".

"Originally the government did not plan eradication, but stumbled into it. When the Prime Minister announced the March 2020 lockdown, her intention was, in her own words, to 'flatten the curve'."

"The eradication strategy is no longer sustainable. The emphasis should shift to minimising the harm of Covid while accepting that it is impractical to keep the virus out completely, and the cost of trying is unaffordable. We should move to a new strategy of harm minimisation."

Industry should be invited to co-design self isolation, social distancing measures and contact tracing solutions, in a series of 'sprints' the party said would be a welcome alternative to what it said were rigid and arbitrary rules that led to absurdities in nearly every sector.

"We believe that the government should be collaborating with the likes of hospitality, with business, with the expo and major events communities, with those in healthcare and with those in education to find ways and protocols to achieve those goals of harm minimisation at least cost," Seymour said.

The party said blood oxygen monitors should be issued to Covid-positive patients who were at risk of hospitalisation, with instructions to only admit themselves if their blood oxygen levels dropped to a given level.

Seymour said the oxymeters could be bought for $30 each, and could reduce the number of people going into hospital, "but we're not seeing that sort of collaborative thinking and that's what the sprints are about".

"The ultimate policy goal should be to ensure that people do not die from Covid. Measures to reduce transmission and hospitalisation, especially to vulnerable populations, will do much of this work. Vaccination is again the most effective tool, but treatments, and ICU surge capacity should also be expanded."

It called for "isolation policy" to shift away from city- or region-wide lockdowns to isolating travellers, the infected and the vulnerable, with strict protocols for retirement villages.

It said the government had refused to adopt a culture of inviting criticism, and a change in tone "moving from fear and public health towards optimism and a balanced approach to overall wellbeing" would better prepare the country for an inevitable change in strategy.

The National Party is set to release its own Covid-19 plan tomorrow, and Seymour said he was looking forward to seeing the proposals.

"I'm looking forward to what they have to say. I have a lot of personal respect and affinity for Chris Bishop, he works hard, he thinks hard and I think their contribution should be good too.

"In a free and pluralistic society we need more voices proposing good ideas."

National's leader Judith Collins said its plan would be the "most complete, comprehensive and well researched blueprint to immediately address the significant issues within the government's lack of planning around managing the Covid response and reconnect New Zealand with the world".

It would aim to have fully vaccinated New Zealanders travelling in and out of the country by Christmas and put an end to nationwide lockdowns.

"Our plan will end the isolationist approach of the government and give Kiwis hope," Collins said.

He said he had a lot of respect and time for Collins, but he was not the right person to ask about whether she should remain as party leader.

"Ultimately I'm focused on the voters and the policies - and the other politicians, look, they come and go."