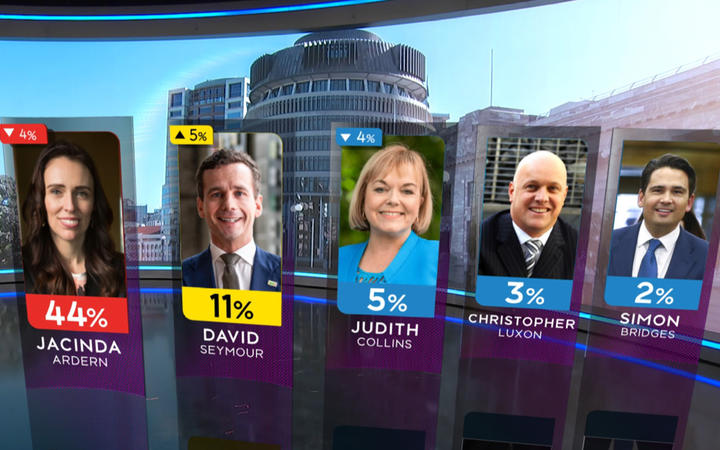 Labour and National both dropped three percentage points, to 43 percent and 26 percent respectively.

On those numbers, Labour would be unable to govern alone.

Jacinda Ardern remained atop the preferred prime minister rankings at 44 percent, but it was drama on the opposition benches with Collins' approval rating dropping 4 percentage points to 5 percent, below Seymour's 11 percent.

National MPs Christopher Luxon and Simon Bridges were nipping at Collins' heels with 3 percent and 2 percent.

The fact Collins was now behind Seymour as preferred prime minister, was "the worst kind of news for that party", Patterson said.

"There are definitely active moves or talk about removing her as a leader from a number of MPs who are very, very unhappy with her leadership and not just her performance but also the kind of culture that is in the caucus at the moment."

But Auckland's alert level 3 is slowing any moves, as is MPs' concerns about talking about themselves or their party in the middle of a pandemic, Patterson said.

It was worrying for National that they remained in the 20s, and also raised questions about who would want to take over as leader at this stage, Patterson said.

Former leader Simon Bridges was the only one being talked about in the caucus, but he has been protesting that he doesn't want the job, Patterson said.