Green Party co-leader James Shaw is defending against accusations of hypocrisy for travelling to a climate conference in Glasgow after criticising Parliament's sitting at alert level 4. 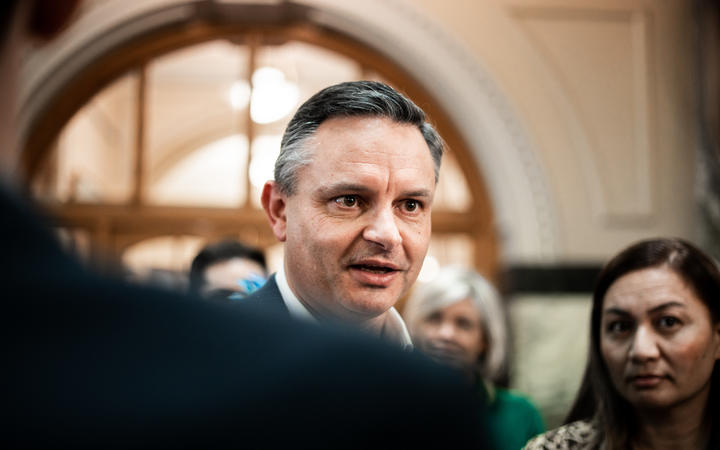 The Green Party refused to attend Parliament while Wellington was still at alert level 4 on Tuesday last week.

Shaw at the time had said there was a perfectly serviceable option that would enable MPs to work from home - Parliament via teleconferencing software Zoom - and politicians should be modelling the health advice to stay home. He said the party was reluctant to be returning to the House even at alert level 3.

"I think it's absolutely irresponsible, I mean it literally risks people's lives by holding an in-person Parliament," Shaw said.

This year's United Nations Climate Change Conference - or COP26 - is being held in Glasgow, Scotland, in November. Shaw, as Climate Change Minister, is expecting to attend.

"Shaw is on the record saying many people, such as teachers, have adapted to working over Zoom. It seems that Shaw's regard for international conferences, this one being the 26th of its kind held, is higher than his regard for New Zealand's Parliament," Seymour said.

He said it was even worse to be travelling to a Covid-19 hotspot which recorded nearly 6000 cases yesterday considering the demand for MIQ spaces, and the fact Shaw had declared a climate emergency.

"Surely if he was taking this so-called 'emergency' seriously he would stay home and not increase his emissions profile."

However, Shaw this afternoon said the annual multinational conference - being held for the first time in two years after being cancelled in 2020 due to the pandemic - simply was not being offered.

"We don't have the option of a virtual COP. It's not been made available to us," he said.

"There are negotiations that are happening online but the United Kingdom and the UNFCCC (United Nations Framework Convention on Climate Change) feel that we're not going to be able to make the kind of progress that we need to make without some portion of it happening in person."

"I would prefer not to go, to tell you the honest truth. If I thought that I had some way to influence that, then I would. But I don't. It's not up to me .. also Glasgow in winter? Who needs that."

He contrasted that with Collins and Seymour's refusal to have Parliament sit virtually.

"David Seymour and Judith Collins had the option of a virtual Parliament ... they rejected that option because they wanted to be able to have in-person conferences like this one. Media conferences," he said.

Shaw said he would be following all the health advice, and while the plan for now was to attend the conference it would change if the advice was changed.

"Unlike the National Party and the ACT party, the Green Party believe that we should follow the health advice. So if I do go to Glasgow then I will be following the health regulations on my way back in, isolating and testing which is not something that Judith Collins did when she travelled from the heart of the current outbreak.

"It may be impossible for me to go. For example, if I can't secure an MIQ spot and I can't get back into the country then I won't be leaving. If the situation of the virus changes and the health advice is that I shouldn't go then I'll follow that."

The countries calling most urgently for action on climate change were those most affected - like New Zealand's Pacific neighbours, he said, and it would not be consistent for Aotearoa not to show up to the conference, which would be attended by more than 200 countries.

"We've taken quite a strong stance on these things internationally and we want to make sure that the coalition of countries that are holding out for high environmental standards and for environmental integrity win the day when it comes to those negotiations.

Immigration Minister Kris Faafoi defended Shaw's planned trip, which will require MIQ rooms on return for the minister and those accompanying him.

Faafoi told Checkpoint it was important the business of government continued. He said there would be a small number of people going, but could not say exactly how many.

A spokesperson from Shaw's office said there was nothing hypocritical in following health advice.

"Opposition MPs in Parliament were given the option to meet virtually. There isn't a virtual option for COP. Exactly as he did with the return to Parliament, the minister will follow all the health advice, including returning to New Zealand through MIQ," the spokesperson said.

"Those nations most impacted by the climate emergency have urged countries to come together at COP to agree a major and urgent increase in action, as well as to accelerate funding to support mitigation and adaptation in the most vulnerable countries.

"Minister Shaw is attending so NZ can play its part fully in bringing about this outcome. Of course, if New Zealand is at alert level three or four in November then we will seek health advice on the best thing to do."