The Sport and Recreation Minister Grant Robertson was deluged with emails about Laurel Hubbard's Tokyo 2020 Olympic Games selection over the past few months. 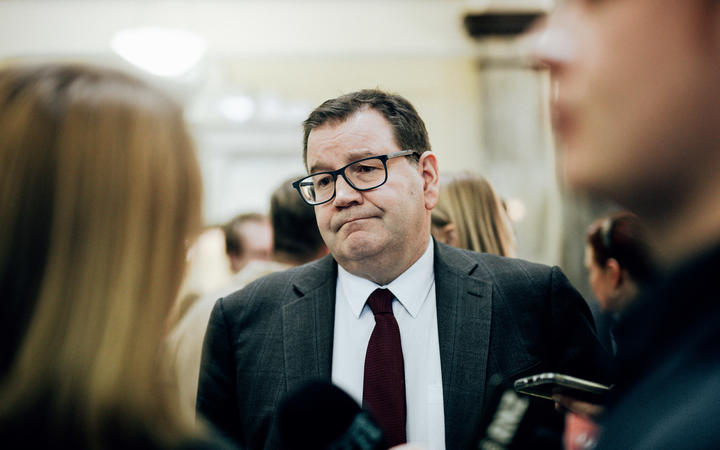 Emails obtained under the Official Information Act show the Minister received dozens upon dozens of letters from people wanting to discuss the issue of trans participation in sport, and specifically, Hubbard's participation in the Olympics.

Hubbard competed on Monday night at the Tokyo Games, but did not finish in the 87+ kilogram weightlifting category after she failed her three attempts at the snatch.

She made history as the first openly trans woman to compete at the Games.

One letter sent to Robertson's office, but originally sent to the Prime Minister, came from the mother of a trans athlete in the United Kingdom, who said the New Zealand government's support for Hubbard's selection had a "massive impact" on the trans community worldwide.

"Thank you for stating and confirming that recently selected transgender athlete [Laurel Hubbard] has followed all the rules which have, subsequently, resulted in her selection for the Tokyo Olympic games becoming the world's first transgender athlete to compete," the letter reads.

"I have no doubt that this small gesture of a token of support will have a massive impact on not only Laurel Hubbard but to the transgender community and their allies not only in New Zealand but across the world."

The mother also sent the email to UK Prime Minister Boris Johnson and the First Minister of Scotland Nicola Sturgeon asking them to address anti-trans hate in Britain.

She said her daughter is fearful of attending some events after protests in the UK.

"Frankly, it makes me ashamed to be British," she said.

"I wrote to my daughter's governing body earlier this year highlighting such concerns as a result of her being the subject of targeting by the activists... and continues on a sporadic basis but with equal venom.

"This has included talk of encouraging people to protest at races and (thankfully) although this has not yet happened this means that we've had to put out own safeguarding protocols in place, are always in a heightened state of alert at every competition."

Robertson responded by saying he supported steps to further understand the issue of trans participation in sport, "and ensure sport remains open and inclusive for all while protecting an even field of play".

Among the emails were dozens of almost identical emails originating from a women's rights lobby group.

The emails signed off by saying: "I value women's sport and I'm speaking up for it. Will you?"

Another email quoted Robertson's maiden speech back to him.

"In that address you note your abhorrence towards the marginalisation and discrimination of peoples," it reads.

"You also salute the David and Goliath encounter between David Lange and the World - New Zealand standing up to world powers.

"You will therefore know, no doubt better than I do, that New Zealand has had another such champion in the form of Kate Sheppard.

"This decision - to permit Laurel's competing - undermines Kate Sheppard's good work and legacy. I ask you to act, and act decisively to reverse this decision."

Another of the emails finds a comparison to a famous New Zealand sporting moment.

"To include Laurel Hubbard in the team may not be illegal, but it's certainly immoral. Just like underarm bowling in cricket really."