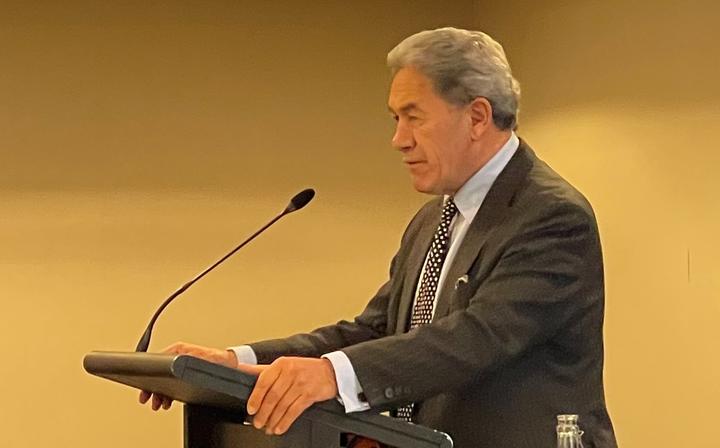 He was speaking at the party's AGM in Auckland this afternoon - his first public speech since failing to return to Parliament after last year's election.

Apart from the odd appearance, Peters has kept out of the public eye since New Zealand First failed to be re-elected - picking up just 2.6 percent of the party vote.

Peters told the crowd of about 100, his party is coming back and remains loyal to New Zealand.

"So many critics and scribes have tried, and continue to write our obituary. But we are here today, as always, steadfast and resolved to put New Zealand first."

Peters also criticised the government's management of the Covid-19 vaccine roll-out, te reo usage, the Green and National parties, and the media.

"We are a phoenix that will again arise as the public wake up to the inexactitude of this government and a hapless National Party."

Referencing former prime minister John Key's drive to change the New Zealand flag, Peters said people were now being asked to change the name of the country to Aotearoa.

"It comes from a haughty autocracy that says we know best which is why you are being told to change your country's name to Aotearoa without any reference to you or the cost of remarketing the name of a nation known worldwide," he said.

"Their choice is for a name that historian King pointed out many years ago, was never the name for New Zealand.

"So why for example has the NZTA become Waka Kotahi - and when was the last time a government initiative used an English name that, heaven forbid, way over 90 percent of the population might understand?" 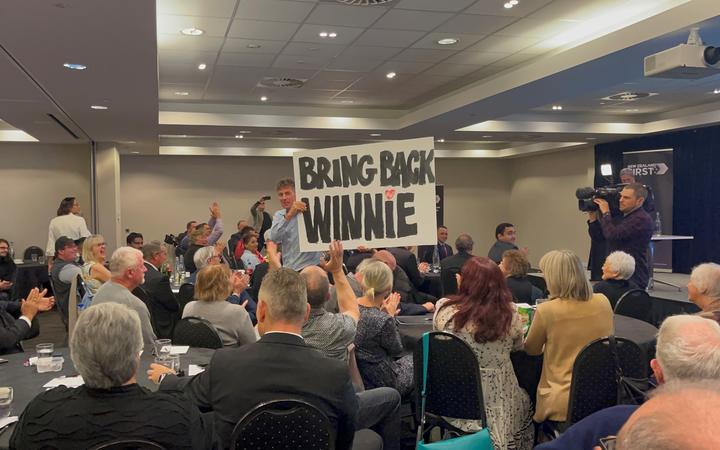 A person in the crowd puts up a poster in support of New Zealand First leader Winston Peters at the party's AGM on 20 June, 2021. Photo: RNZ / Katie Scotcher

A "name change cult" has suddenly appeared among our "democratic masters", Peters told the audience.

"I mean, who signed off on this plan to change New Zealand's name? Who was asked? More broadly, when were you asked to approve that?," he said, pointing to the audience.

"This is straight out of John Key's flag change playbook."

The Covid-19 disruption was Labour's "Global Financial Crisis", he said.

"In great danger, people get scared, they want to stay with what they've got, but let me tell you if it's unchallenged it will produce a powerful effect on our politics and the psychology that sits beneath it."

He criticised the vaccine roll-out, saying it was not fast enough, and said future taxpayers would pay well into this decade for the debt being racked up.

He described the health system as "decrepit", the country's economic performance as "inferior", and said the government promised so much on mental health, but so little had been achieved.

"And we have lost so much of our social cohesion whilst our leadership boasts of how well we're doing."

He was not challenging the prime minister's good intentions and her crisis leadership, saying in government "we backed it".

"But on countless occasions we challenged that they had few plans on delivery."

Peters criticised KiwiBuild and the EV scheme, before highlighting his party's success in the last term, including "turning around" the "run-down" KiwiRail and Defence Force, and investing in the provinces.

"We take pride in so many projects that we, and we alone, drove to success, even though this government is claiming it as their work - like a new Scott Base, like restoring the East Side railway workshops in Dunedin, like the biggest mussel farm in the world at Ōpōtiki, and hundreds more."

In the 28 years since New Zealand First formed, it had been "stigmatised and marginalised", Peters said.

The party has been needed over the last three decades, and was needed now, he told the crowd.

"We are coming back," he said.

Julian Paul was elected as the party's new president, and four of the six elected board members are women.

Peters was due to speak to media after his speech but left the venue before reporters could question him.