The Australian government says it has finalised a deal for a limited travel bubble across the Tasman, but New Zealand PM Jacinda Ardern says the country is still not ready to have quarantine-free travel. 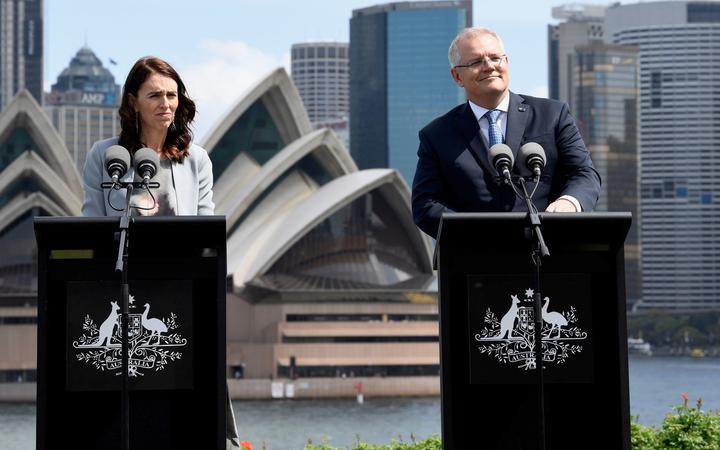 Announcing the news across the Tasman, Deputy Prime Minister Michael McCormack said stage 1 of a travel zone with New Zealand would see quarantine-free travel into New South Wales and the Northern Territory.

"This is the first stage in what we hope to see as a trans-Tasman bubble between the two countries not just that state and that territory," he said.

He said the borders will reopen with New Zealand on Friday 16 October.

"This will allow New Zealanders and other residents in New Zealand who have not been in an area designated as a Covid-19 hotspot in New Zealand in the preceding 14 days to travel quarantine-free."

He said there was a 3x3 definition - three days where there have been fewer than three cases.

"This is the first stage in what we hope to see as a trans-Tasman bubble between the two countries, not just that state and that state."

But the changes will not allow Australians to travel to New Zealand.

"I know if Jacinda Ardern wants to have Australians going into New Zealand, that will be up to her," McCormack said.

Earlier Ardern told reporters at Labour's housing and resource management policy announcement this afternoon that it was still too unsafe to be opening New Zealand's borders to Australia.

"In our view we are not ready to have quarantine-free travel with Australia. They have a very different strategy to us, and so they're making that decision ... but for now we of course have to keep our New Zealanders safe."

A short time ago, a spokesperson for the Prime Minister confirmed that remained the New Zealand government's position.

She urged New Zealanders to spend their tourism dollars domestically, and cautioned that those going to would have to go through isolation when returning.

"I encourage New Zealanders to think about spending their dollars here locally."

She says the pressure for New Zealand to open up has been "the same the whole way through", implying that Australian states opening their borders would not affect her decision.

"The National party in particular have called for us ... to open up the border. We have resisted that because we want to keep New Zealanders safe. We will not open the borders for quarantine-free travel with Australia until it is safe to do so bc doing it too early risks losing all of the freedoms we already have in our economy."

National Party leader Judith Collins said it seemed clear New Zealanders will be able to go to some Australian states but when they come back they will have to go into quarantine so some will just stay there longer and Australians will not be able to come here.

"Tourism in New Zealand, domestic tourism, will also suffer if those people with the disposable income are going to go to Australia and spend their money there and then say 'I might as well stay for three months while New Zealand sorts itself out' - of course we're going to lose more business."

Collins said pushing a travel bubble with Pacific countries is an obvious thing to do, but it's not feasible until a border protection agency is in place and safety can be assured.

It's important to ensure that New Zealand does not export Covid-19 to places like Samoa, she says.

"Someone might want to buy a one-way ticket to Australia to reunite with family but no-one's going to hop on a plane and go for a weekend's shopping in Sydney and come back into two weeks' isolation in New Zealand," Roberts said.

"It's the first development of opening up the Tasman, but it's fairly inconsequential."

Roberts said he think internal Australian politics is behind the announcement.

"The federal government in Australia and the government of New South Wales are working together to put pressure on the other Australian states to open up, because there are still barriers to travel from state to state in Australia. What they really want is for all of Australia to open up. New Zealand is sort of being used to get that to happen.

"In a way we're happy to be used because it starts the conversation. We can start having talk about how that safe travel can happen. But until we can have isolation-free travel on both sides of the Tasman it's not going to make a big difference.

"We think once we get past the election we can have some further discussions between the two governments, hopefully the borders can open in a proper fashion before Christmas."