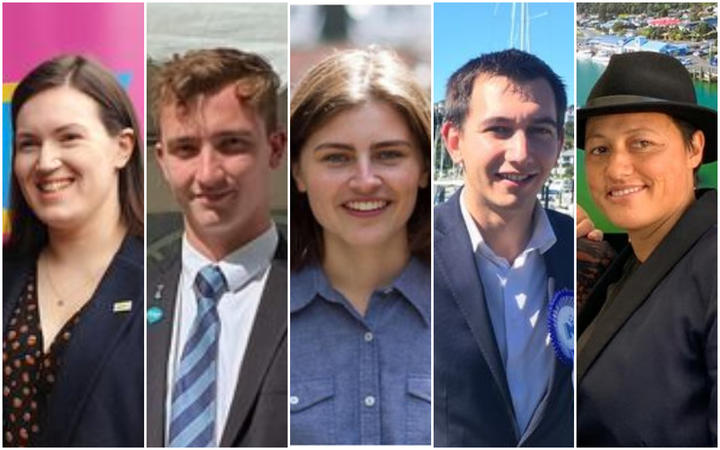 Kiri Allan from Labour, Simeon Brown from National, Chlöe Swarbrick from the Greens, Robert Griffith from NZ First and Brooke van Velden from ACT squared up against each other in a lively evening hosted by Jack Tame.

At times, it seemed like an Allen, Brown and Swarbrick show, with van Velden and Griffith hardly getting a word in.

Tame's first "curly question" asked what the respective parties would do to relieve the financial burden on younger generations.

Allan said Labour's plan was to make sure "every dollar we're investing is in things like sustainable futures".

Brown's line repeated what's been heard from other politicians in National this campaign: A focus on stimulating the economy with a short-term tax cut and growing jobs.

The Greens had six policies to help youths but what Swarbrick focused on was a guaranteed minimum income: $325 per week.

Van Velden had a crack at Labour's Covid-19 recovery plan and its debt levels, likening the impact its borrowing would have on future generations to "fiscal child abuse".

That earned her a sharp, angry rebuke from Swarbrick, who called the remark "disgusting", before launching into the subject of child - and family - poverty.

Swarbrick's lack of enthusiasm for van Velden's response appeared to be reflected by the crowd, whose responses to the ACT candidate were lukewarm throughout the evening.

Griffith claimed his party's plan was the only one where "someone doesn't lose".

Next issue up was housing.

Brown's take was that the cost of housing was an issue, but he focused on the Resource Management Act: "We're not just going to reform it, we're going to burn it and replace it."

He got into an argument with Allan, starting when he accused Labour of stopping "more houses being built at Ihumātao than they've actually built through KiwiBuild".

Tame asked the candidates a yes or no answer question: Should house prices go down?

Swarbrick was the only one who played ball with a direct answer - yes, she said, they should.

The rest couldn't give a straight answer.

Brown's response amounted to a no. Allan wanted them to be "more affordable" and van Velden said they should "stay where they are". Griffith said "either the average wage goes up or house prices come down".

Tame moved the housing discussion onto renting - "how would you make sure renters have warm dry homes?", he asked van Velden, whose party opposed healthy homes for rental homes.

"There's not just enough homes. If we had more supply in the market, we'd be having better quality homes because people would be wanting you to come and rent," van Velden said.

She went on to say she thought the real issue was that people were spending more than 50 percent of their income on renting.

She pitched for getting rid of the RMA - that'd allow for more building - more houses - and lowered rents.

Swarbrick had reforming the RMA pitched to her by Tame and seized the moment for a jab at Brown's remarks about Ihumātao, saying "apparently, we need to build all the homes on stolen land".

That got a good reaction from the crowd, who were responsive to her all night.

Griffith got a short chance to outline NZ First's position on housing before the subject swung to climate change and the spotlight was back on Swarbrick.

Tame challenged her on the Greens' effectiveness in government, to which she replied: "We have got more action on climate change in the last three years than the last 30 years combined".

Brown weighed in only to be challenged about the amount of roads his party planned to build. He took a few shots at Labour's climate record, including leader Jacinda Ardern's "nuclear free moment" comment.

Allan defended her party by bringing up National leader Judith Collins' plans to slash climate legislation, before she and Brown got into another argument.

Van Velden opened her response on climate change with "I'm an environmentalist", prompting laughter from the crowd. But she called for a "no nonsense climate change plan", and said her party would include agriculture in the Emissions Trading Scheme with a price on carbon.

Griffith got a few words in on climate, and said NZ First would be inclusive of all in its approach. It wouldn't make the worst greenhouse gas emitters pay more, but subsidise them to transition to more climate friendly practices.

He also snuck in a remark about the NZ Defence Force - while under Ron Mark - being the first defence force in the world to recognise climate change as a problem - allowing it to invest in solutions.

The last big subject for the evening was student debt, something most of the crowd gathered had weighing over them.

Much of the focus was on Labour's fees free scheme - and its plan to axe parts of that.

If someone worked in New Zealand for the same length of time as their degree took to complete, NZ First would then write off the debt, he said.

Tame wrapped up with a series of quickfire questions: "I know it's really annoying when people in my position wrap complex issues up into binary questions - but that's what we're doing".

The crowd appreciated that one and Tame launched into his questions.

The most memorable reaction was Swarbrick's response to "should we remove statues of historical figures who are deemed to have been racist?".

"Put them in a racist garden."

Shortly after, it was all over, as Tame pointed out that just 68 percent of people under 30 voted in the last election.