The National Party would pay tertiary providers $4000 for every unemployed person they retrain and get into full time work as part of its reskilling and retraining package announced today.

Announcing the policy in Nelson this afternoon, party leader Judith Collins said it was about getting New Zealanders back to work and developing a stronger economy.

The party said it would ensure the social welfare system is geared towards supporting and encouraging people to move from welfare back into work.

It estimated the SkillStart scheme would help at least 30,000 New Zealanders into full time employment. The scheme would apply to programmes between three months and a year in length, and existing tertiary providers with good track records would be fast-tracked on programmes based on industry need, it said.

It would not apply to school leavers, and students would need to have been either unemployed or on a benefit - excluding JobSeeker Student Hardship - and keep their job past the 90 day trial period for the provider to be eligible.

Collins said it would target many sectors and "will see more New Zealanders get back into the driver's seat".

"As we know, people can get qualifications, doesn't necessarily mean they can get a job from them. So here is a real incentive for the providers of education to get their graduates into work.

"This funding creates a very strong incentive and signal to training providers - in other words we want you focused on stuff that matters ... no messing around, just stuff that's going to get jobs."

She said training providers, properly incentivised and working with the employers in their regions, were in a much better position to identify where new jobs would come from and the skills necessary to fill them.

"There's loads of jobs right now in for instance the tech sector, there's no reason at all why people can't train into some of those jobs. 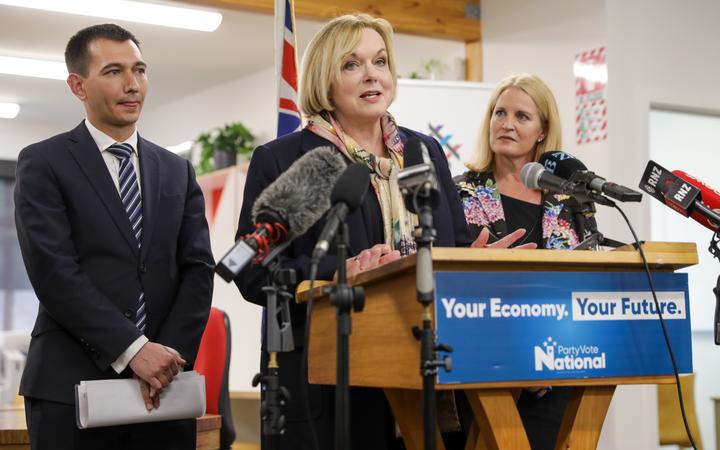 Tertiary education spokesperson Simeon Brown said it would be partly paid for by disestablishing the workforce development councils that had been proposed.

"That's worth $230m, none of that's been spent by this current government, it's wasteful money. We're going to allocate it into actually getting people skills to people who've lost their jobs so they can get back into work."

He said Labour was talking a big game, spending hundreds of millions on reshaping vocational education, but that was not what was needed at this time.

"Actually we're in the middle of a pandemic, an economic crisis, we need to be training people to get into jobs not talking about who should be paid what in terms of chief executive salaries.

He said there were more than 20 people with the title "chief executive" in the NZIST polytech organisation.

"They've spent $1.6m on consultants, $2.3m on the CEO and the six DCEs salaries, is that actually getting people into jobs or providing seven cushy jobs for their mates?"

The party expected its 12-week business course would help 5000 New Zealanders start a business. The Business Accelerator was estimated to provide $5000 subsidies to 4000 people.

Social Development spokesperson Louise Upston said the aim with under-25 job coaches was to have at least one working in every Work and Income office in New Zealand.

"If it's a WINZ (Work and Income) office that's got a larger number of young people who are currently unemployed then they would need more," she said.

She said it was modelled on other programmes that had been used to support offenders into work.

Labour party education spokesperson Chris Hipkins is hammering National's new tertiary education policy, saying they don't have the money to pay for it.

"The National party seem to have totally given up on identifying how they are going to pay for the policies they are shovelling out there on a daily basis now.

"The announcements they have made today alone would spend more than the new spending allowance that they have left, so what are they going to cut in order to pay for the policies they have put out today?"

"I think one of the problems with the incentive that the National party has announced is it is not targeted. We saw a plethora of training courses following the global financial crisis that didn't deliver good solid long-term outcomes. What we've been focused on is making sure that increasing participation in tertiary education is in areas where we have known skill shortages, so that we can improve the employment outcomes for the people who complete those courses.

A problem with National's proposal is that tertiary education providers "follow the money", Hipkins says.

"As a government, we are driving towards a new system that will put employers in charge of the programmes which get funded, because employers actually know best what their skill needs are."