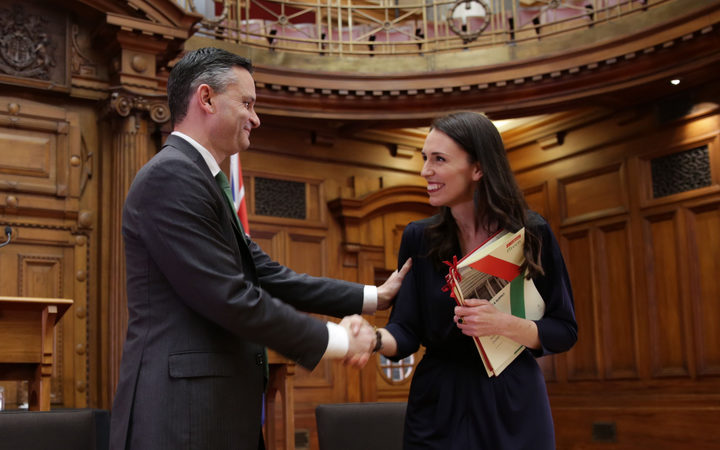 Shaw was campaigning in Lower Hutt today and spoke to a crowd of around 30 supporters in Eastbourne this afternoon.

In an interesting campaign tactic he opened his speech by admitting he hadn't been to Eastbourne since he was a child. 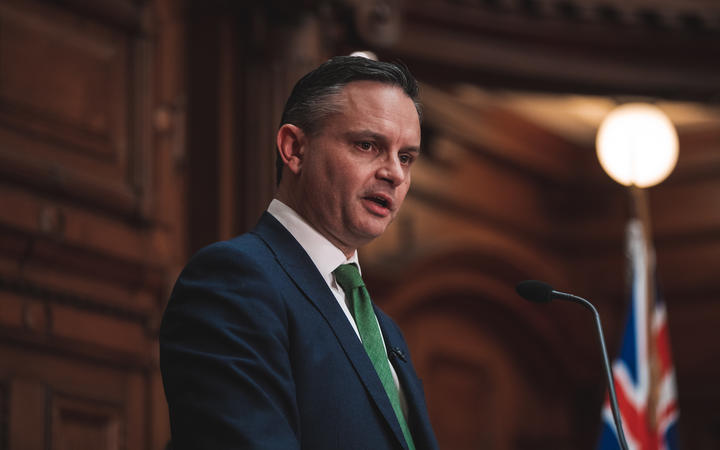 James Shaw has had to admit that he hasn't ventured as far as Eastbourne for years despite living in nearby Wellington. Photo: RNZ / Samuel Rillstone

Alongside him was Greens Hutt-South candidate Richard McIntosh.

"Richard is an actual arborist, which in the Green Party you would think was a bit of a cliche but I think pretty much he's the only one that we've got on our list. So a really nice counterpoint to Ginny [Anderson] and Chris Bishop who kind of occupy other parts of the political spectrum shall we say. So a real proper tree hugger for the area," he said.

McIntosh briefly addressed the small crowd, asking for their party vote, saying "from the outset, we're not expecting Hutt-South to elect a Green MP in 2020".

Shaw said McIntosh was a "terrific guy" and people should vote for him if they wish, but he said the best way to ensure Labour gets back into government was to party vote Green.

Shaw said he understood that a lot of people wanted to ensure Ardern continued as prime minister.

"We do too. I know that's counter-intuitive for some people, but actually, a vote for the Greens is the most powerful vote you can wield in order to ensure Jacinda continues as prime minister and we have a strong Labour-Green government", he said.

Shaw also told supporters that the bigger the Greens' caucus the more bargaining power they would have to push for bold policies, such as their wealth tax, in coalition negotiations.

He said they were hopeful of getting "some version of this" policy over the line with Labour.

No bottom-lines for Greens

Speaking to reporters afterwards Shaw reiterated why the Greens won't make the wealth tax a bottom-line.

"We don't do bottom-lines. And we've done this every election for as long as I can remember, is we've said we'll sit down in good faith after the election, we'll look at the numbers and say what of this programme can our partner party sign up for. And we'll negotiate hard for that, we will," he said.

Shaw said drawing lines in the sand before polling day was "a zero-sum situation" where the other party is forced to rule things out "and you cannot actually negotiate anything after the election".

Shaw also pitched to supporters that the Greens were the only party taking a truly long term view of the Covid-19 recovery.

He said Covid-19 is "frankly a short-term crisis", and it presents an opportunity to fix other challenges, such as climate change and inequality.

"We have a responsibility to do that because if we don't then our children and our grandchildren will be paying twice. Once to pay off the debt associated with getting us through the pandemic crisis and again to deal with those other challenges they inherit from us because we haven't dealt with them sufficiently," he said.

Shaw said while he saw "hints" of this attitude from Labour, the Greens were the only party really "thinking ahead".