The Green Party is heading into the election with "no bottom lines", but first have to secure a place in the next Parliament.

With Parliament dissolved and politicians hitting the campaign trail, RNZ presents a series of interviews with party leaders.

James Shaw steadied the ship in 2017 when the dramatic departure of then co-leader Metiria Turei threatened to sink the party's campaign, at a time the Greens had their best shot at getting into government.

Now he's in damage control once again after the Green School controversy blew up in his face, and once again just weeks out from the general election.

Shaw and co-leader Marama Davidson now have to focus attention on their wins in government and convince enough voters to put them back there.

Labour's dominance could yet be a blessing or a curse for the Greens; left leaning voters could look to back the Greens to avoid a majority government, or its popularity could help decimate the Greens' vote.

Its advantage is the weakened position of New Zealand First as it too fights for its survival; there's no love lost between it and the Greens with the term ending in open hostility. The usually mild mannered Shaw has been happy to take off the gloves and trade verbal blows in recent months.

It's the curse of the smaller party in government under MMP - retaining, let alone growing, support as they decouple from the main party and remind voters who they are and what they were able to achieve.

Davidson says they were "encouraged" by their level of support as Parliament wound up, having "defied history for smaller political parties" in first term in government.

Their staunch position on the climate, the environment and inequality is what people expect and what they brought to the government table, Davidson says.

In the last two major television polls, released in July, the Greens were hovering around the 5 percent mark, the threshold needed to return to Parliament without an electorate seat.

Those results were before the Green School controversy, and it's yet to be seen how that will impact the party's public support - if at all.

Either way, there's more work to do, says Davidson: "We'd like to be very comfortable about our chances of getting better, not just the Parliament, but having enough to form a government because we know that transformational change is needed for the big crises that people are facing".

"Well yes," says Shaw," but you always want more than that because the number of MPs that we have determines the number of ministers we can have in the next Parliament, the greater share of the government program that we can expect to be able to influence, and so on.

"So it is one of those cases where the more, the merrier."

Labour's worked with both New Zealand First and the Greens, and at times both relationships have been strained. Talk to senior Labour figures though and there'd be more of a willingness to get back into bed with the Greens; partly because there's more ideological alignment, but also they've just been easier to deal with.

That is a double-edged sword, however, sometimes meaning the Greens lost out when it came to a knock-down policy fight within the Coalition.

Davidson believes most voters don't want a one party, majority government, "to have and wield all the power".

That extends to some Labour voters, she says, with a "definite cohort of that who know that it is the Greens who will push for further and faster action for the more transformative changes to take place."

"So we're very clear that what we need to do as the Greens, regardless of any other political party, is really focus on people supporting our vision, putting up a good contest of ideas, how about that?"

There have been Green wins, most notably the passage of the Climate Change Response (Zero Carbon) Amendment Act, setting goals for New Zealand and laying out a framework to meet its Paris Agreement commitments, action on banning plastics, and the ban on new offshore oil and gas exploration.

While there were inevitable compromises with the Zero Carbon legislation and other policy responses like progressing the Emissions Trading Scheme, they are tangible wins to present to supporters that tick traditional Green boxes.

There was also a 'Green' hand in many social policy areas: housing, welfare and resources for protections against domestic violence to name a few.

More than "99 percent" of what the party achieved was outside of its confidence and supply agreement with Labour, says Shaw, and it is having a seat at the table that delivers the greatest advantage.

But there are some clear areas where the Greens didn't get what they wanted, including light rail in Auckland, and a resolution on the Kermadecs marine sanctuary.

His biggest regret was not being able to get a capital gains tax across the line, but no party in the government got everything on their wishlist, Shaw says.

"And some of it's just circumstance, even in some of those areas where we haven't been able to tick it off there has been considerable progress... there's almost nothing that's in there that we would say that we haven't at least made some progress on."

"There are absolutely no bottom lines" for the Greens if they end up around the negotiating table after the 17 October election, Davidson says.

"We're being very clear about what our priorities are but we are not setting bottom lines... and again, it does come back to the amount of support we have, the amount of votes we have, and what our party decides to put us in the best political position. And that could [look] like a range of options."

Davidson says that extends to not knowing at this stage exactly what ministerial positions they'd push for; "it's all very, very honestly dependent on the vote".

Ministerial positions had to be considered in the broader context, says Shaw, so if for example, the only role on offer was deputy prime minister - "no, what point is that?"

"The reason why we're here and the reason why we want to be in government is to be able to advance as much of the agenda that we lay out to the electorate as possible," he says.

"And so, you know, particular jobs really are a function of what do we think is the most effective way to achieve change? That may be one of them, but we haven't even laid out our negotiation strategy yet."

While there were no specific portfolios either leader would say they had their eye on, it's no secret the party's focus is on both the environment and social justice.

Davidson names initiatives like the poverty action plan and the clean energy plan as priority areas, but notes there are many "intersecting portfolios".

"Whether or not they have ministers or associate positions or delegations attached to them is still yet something to be worked out, but we are at least being very honest, very transparent about what our priorities will be, about what the outcomes are." 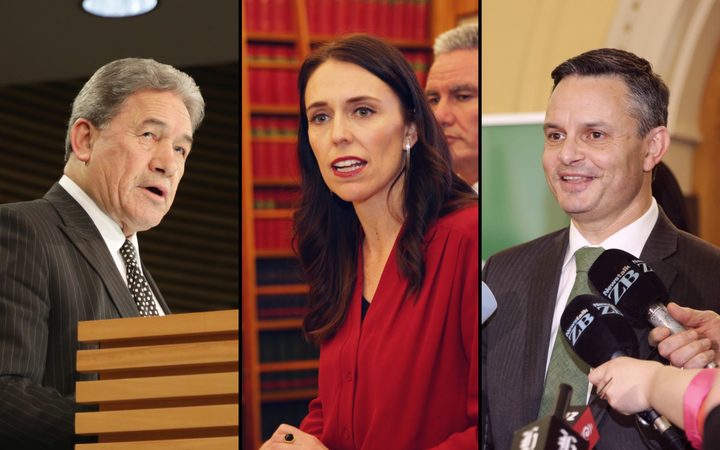 Would one bottom line be a refusal to work with New Zealand First again?

"That's a hypothetical," says Shaw, "because if you look at current polling, it's not a probability we're likely to have to deal with, but ultimately the constellation of parties that make up the government as a function of voters, so they actually decide and who we have to work with in government, and it's really up to them."

But every scenario is different, he says, and has been considered as such.

Would the Greens have "put their foot down" and refused to have worked with NZ First in a similar line-up to 2017? - no, says Shaw, because that would have meant supporting National into government. 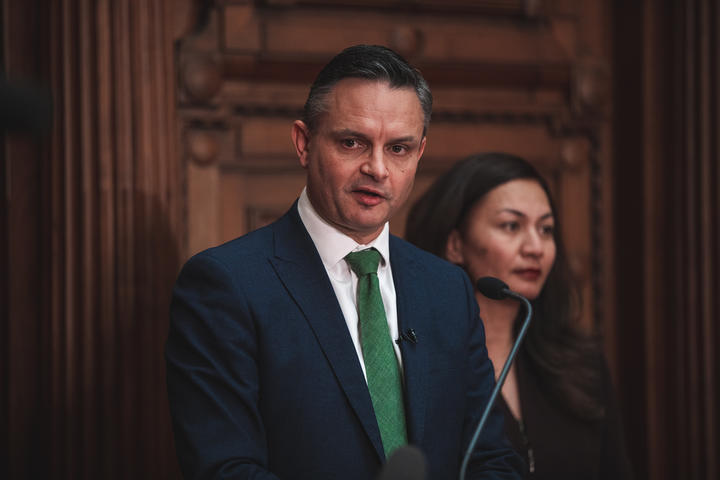 One dynamic that bubbles away within the Greens is the tension between the old school environmentalists, and the new school social justice warriors The tussle over the party's identity is not new and was also a feature of the co-leadership under Shaw and Turei.

The election of Davidson as leader was a clear signal issues like poverty, inequality and the Treaty of Waitangi remained important to the membership, alongside the push for a cleaner, greener New Zealand. There've been low key but persistent efforts to make sure she gets airtime and a larger profile in line with her more well-established, and well known co-leader.

Davidson has settled into her role, but has had a few bumps along the way; the public event where she repeatedly dropped the c-word to highlight violence and inequality for women, with families on a day out looking on.

And more recently saying "tax is love", when so many New Zealanders are under intense financial pressure.

Shaw publicly backed Davidson, as she did when he's been under pressure over the Green School. Even if they weren't always thrilled by the other's actions, they said the right thing and avoided any public displays of internal tension.

Davidson says her "tax is love" comment got a "bit of rark from some quarters" but explains what she meant: "How vital it is to have strongly funded public infrastructure to make sure that we are sharing the wealth among all of us rather than just a few, while many, many of us are missing out on some real basics of living a decent life."

She recognises the words "triggered" some, but says she also heard back from "people also more likely to think about supporting us, they got it and they were like 'yeah, I'm a higher earning person, I'm a higher wealth person, and I absolutely want the country to tax me more', so there was also... that understanding".

Shaw "thought it was funny" when asked if it was an expression he'd use.

"It's one of the those phrases that floats around on Twitter... but it coins a phrase, and what it conveys is actually what we do in a civilised society to support each other," he says.

"And right now, we're at a moment of extraordinary risk as a country, and as a community, and we need to look after each other."

Shaw and Davidson represent the twin priorities of the party; he says they "obviously come from very different backgrounds, appeal to different communities", allowing them to engage with a much broader audience than a traditional one leader model.

The key thing, he says, is the ability to work together; "and the kind of people you are, than necessarily the fact that you come from different backgrounds or anything like that.

"And every caucus in every party has quite a lot of diversity, except for ACT, so the thing is, is to make sure that we're just well co-ordinated, and that we're pulling in the same direction," Shaw says.

"If we were the same there wouldn't be much point having co-leaders."

There will be situations where they say things the other wouldn't - "we know this," laughs Davidson, and that can garner some "short lived" media attention.

Why would anyone expect them to be so "Weetbix the same? I don't think that those expectations are what folk expect of us at all and we don't expect that of each other either".