When Judith Collins sat down with Nik Given, the man with her likeness tattooed on his thigh, she began by telling him: "don't worry about the media, they won't bite you... if they bite you, I'll bite them back". 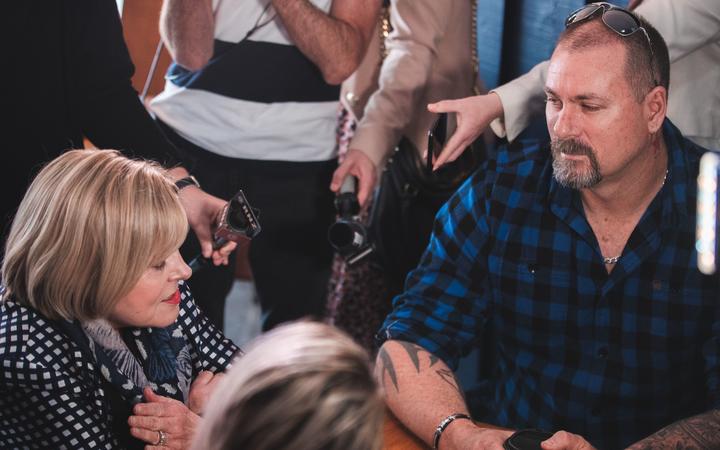 Judith Collins and Nik Given chat about the reasons behind his decision to have a likeness of her tattoed on his thigh. Photo: RNZ / Samuel Rillstone

Given made headlines last week when he had a photo of Collins firing a pistol during her time as minister of police replicated in a colour tattoo.

Today, the pair met during Collins' campaign trail stop in Matamata, with media in tow.

Given said the tattoo took "about six hours, roughly, under the needle in one sitting. There had to be a few whiskeys to get me through".

That was on top of about four or five hours of design work. 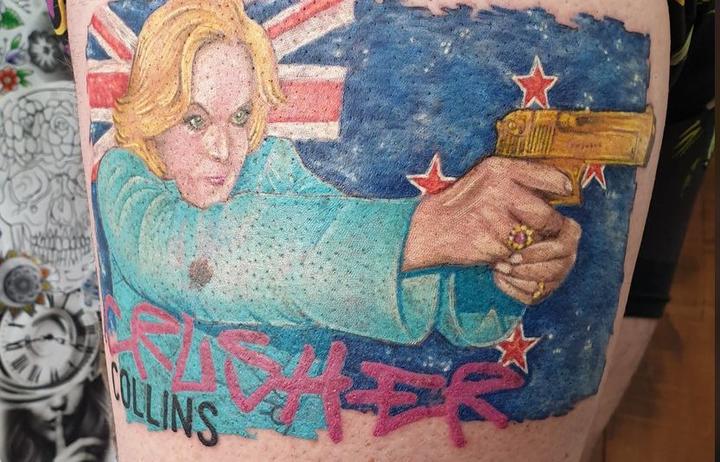 The tattoo was done by Dave Mouat from Dave's Famous Tattoo Studio in Morrinsville. Photo: Facebook

Collins said she was a fan of the golden gun in the tattoo, to which Given replied: "Every Bond girl can have a gold gun."

He called the tattoo a "symbol of freedom. We need someone to free this place". Collins replied by telling him she was sick of being told what to do.

She said she was flattered by the tattoo.

Given later told media "with the whole Covid situation we felt really strongly about being locked up and being a small business we really struggled in a few areas financially... so [the tattoo] was really a message of the freedom to choose what we want to do and choose what to do on myself. I'm not hurting anyone else with what I'm doing.

"It's just a bold statement with me being bold, Judith being bold." 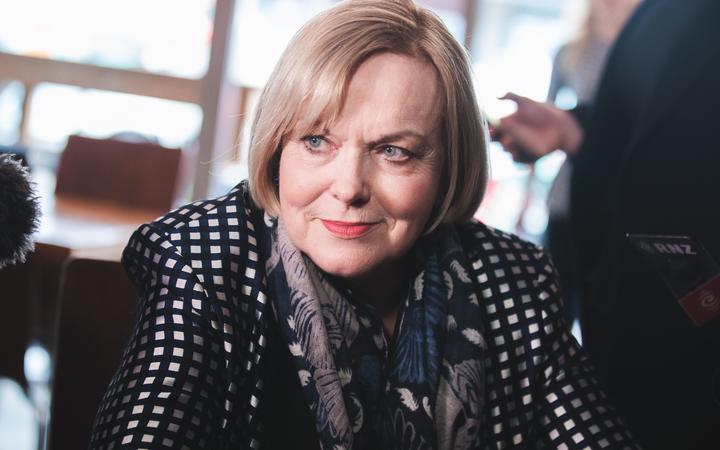 Six months ago, there was "no way" he would have thought of having a politician tattooed on him - and he's open to the idea of getting other politicians inked on his skin.

His wife said she was a fan of Collins but didn't want a tattoo of her - "It wouldn't suit my style".

Asked if there was any chance of a Jacinda Ardern tattoo, his wife said: "I don't want to look at that face forever."

"Personally, I would never encourage anyone necessarily to have politicians tattooed on themselves. I feel like that's a risky place to go.

"I would never encourage anyone to tattoo me on their person - on their thigh or anywhere else."