National Party leader Judith Collins defends a $4 billion hole in National's fiscal plan, pointing the finger at errors in Treasury's hard copy pre-election economic and fiscal update (PREFU) documents and saying they show how easy it is for someone to make a mistake.

Collins has previously said the mistake in the party's "very clear" fiscal plan is "entirely inconsequential". 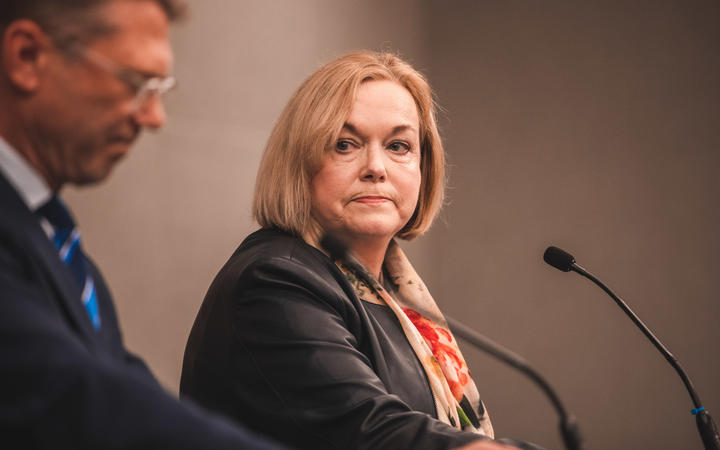 The party's finance spokesperson Paul Goldsmith called the error an "irritating mistake" after being forced to concede over the weekend his numbers did not add up after Labour revealed the significant gap in its costings.

Today, Collins told Morning Report she was sure Goldsmith was asking himself what had gone wrong, and that it was "simply something he has apologised for".

The error means National's intention to bring debt down to 35 percent of GDP by 2034 will now be revised to 36 percent.

"I'm not sure that's going to the biggest issue, frankly, going into this election," Collins said, adding that didn't mean the party's proposed tax cuts would have to go.

"What we are saying is that we will be borrowing money but we will be having less debt in 10-14 years time than the current Labour forecasts have it."

When it was put to her that it meant National would have to borrow more than anticipated to offer its proposed tax cuts, she said: "Not necessarily so, it's only a very short term issue.

"When Paul's done the calculations, what he's done is he hasn't noted that there was one figure out, and that is one figure actually compared to a PREFU [document that was] so bad we ... ended up having to use the website one, because the printed document had multiple errors in it.

"So one error putting together a budget in two days - it's not great but it's not life threatening."

Collins would not outright pin the mistake on the Treasury documents she said had multiple errors, instead saying: "I'm just telling you how difficult these things can be, particularly in the short period of time and when the Treasury secretary advised that we couldn't rely on the hard copy of the documents because of the errors, it just shows how easy it is for someone to make one error, and that is one error".

When it was put to Collins that the inaccuracy in National's Budget was not related to an error in Treasury's documents, she said: "I'm saying that the documents themselves were so inaccurate that secretary of the Treasury contacted Paul Goldsmith and said you cannot rely on the written documents".

Asked where Goldsmith had got the incorrect figure from, Collins said: "From the May Budget and it's not as though he has made it up".

"He has made an error, he has fronted up on it and admitted that he has made an error on one figure. I have said to him that I didn't need to tell anything else to him because frankly, he feels very bad about it."

Collins claimed that Treasury's mistake with written PREFU documents showed "just how hard it is".

Asked if Goldsmith could be trusted to be finance spokesperson, Collins instead chose to criticise Grant Robertson's alternative budget before the 2017 election.

"I just think people aren't silly enough to think that someone who is going to front up and say 48 percent of debt to GDP is fine compared to our 36 percent."

Collins says no other errors have been found in the party's flagship economic policy.

Goldsmith has gone back through the rest of the policy and the corrected fiscal plan will be on the National Party's website today, she says.