Analysis - The government positions itself for an election year spend-up, Winston Peters claims the credit for a hard line immigration policy, the cabinet pushes the Greens aside and Christopher Luxon makes his move into politics. 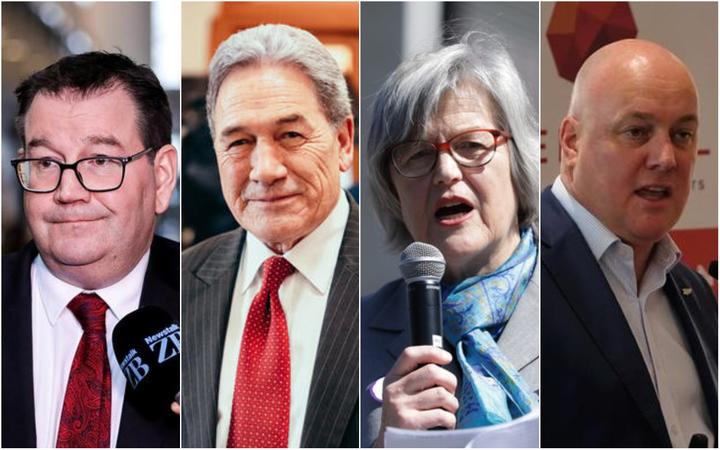 The $7.5 billion surplus unveiled this week gives the government enticing options for an election year budget designed to secure a second term in office.

inance Minister Grant Robertson isn't giving anything away and he doesn't have to - there's plenty of time to assess the best way to impress the largest number of voters.

He told Morning Report the government had got the balance about right. "We know, as a government, it's important to deal with the deficits we were left in health, education and infrastructure," he said. "We're getting on with the job of doing that."

He's being careful and cautious, he won't be drawn on tax cuts and clearly has no intention of giving the opposition anything to clutch at.

Some form of tax cuts could prove to be irresistible, but the government will have to tread lightly. The previous government's cuts were repealed soon after the election on the basis that they favoured high income earners and there were better ways to spend the money.

Whatever Mr Robertson does in that area, he will have to show he is helping the people most in need. There has been media speculation that one way to do it would be to take up a recommendation from the Tax Working Group - a $5000 tax-free threshold which would cost around $1.6 billion. Poorer families would gain the most benefit because a relatively larger slice of their income would become tax free.

It would help the economy because there would be more money for people to spend, and Mr Robertson is under pressure to give it a shot in the arm as slower growth rates are forecast for the next few years. Reserve Bank governor Adrian Orr has been sending clear signals that he has done his bit my cutting interest rates and would like the government to chip in.

National's reaction to a surplus it would have preferred not to see has been to accuse the government of overtaxing everyone, in one way or another. "Mr Robertson's wallet is bulging at the expense of New Zealanders," said leader Simon Bridges.

The announcement early in the week that the moratorium on parent category visas was being lifted revealed a hard line policy that hadn't been expected from a Labour-led government. The amount an immigrant has to earn before they can bring in a parent has been nearly doubled to around $100,000 a year.

Prime Minister Jacinda Ardern did her best to justify it by saying the concern had been to avoid parents falling on hard times when they came to New Zealand, but there was a chorus of discontent over the high threshold. Immigrants pointed out the difficulty of earning that much and individual cases were reported of teachers and a policer officer who wanted to bring their parents here but were well short of such a high salary.

The policy had New Zealand First's fingerprints all over it and at the end of the week Winston Peters confirmed his party pushed for it. He told RNZ it was only when a skilled immigrant was living in New Zealand, was critical to the workforce and was in demand internationally did it make sense to allow them to bring in a parent. "What we had here was up to 31 percent of so-called sponsors having left this country to go off to other countries, including Australia, and leaving the cost to the taxpayers," he said.

While New Zealand First was getting its way, the Greens didn't. Land Information Minister Eugenie Sage had turned down OceanaGold's application to buy land to extend its Waihi mine, deciding it was environmentally unsustainable. The company was reported to have been advised to apply again, which it did. This time, Finance Minister Grant Robertson and Associate Finance Minister David Parker were the decision-makers and they gave it the green light, citing the need to retain hundreds of jobs and ensure exports worth $2 billion over the next nine years. Ms Sage had no role in that. "They assessed a different application and made an independent decision based on the information in that application," she said.

And after months of speculation Christopher Luxon has made his move. The former Air New Zealand chief executive wants to stand for National in Botany, the seat held by rebel independent Jami-Lee Ross. Mr Luxon has to go through the usual selection process but it's a foregone conclusion. It's a safe National seat and he will win it. After that it's up to him, and being a successful CEO doesn't necessarily mean he's going to morph into a successful politician. Sir John Key thinks he will. The former prime minister described Mr Luxon as "world class" and wished him well. Those in National's caucus with leadership aspirations might not feel that way. "Make no mistake, this is an open challenge to Simon Bridges," said Newshub's Duncan Garner.