The government says it's taking a big step in addressing the inequality of access to cancer care across the country. 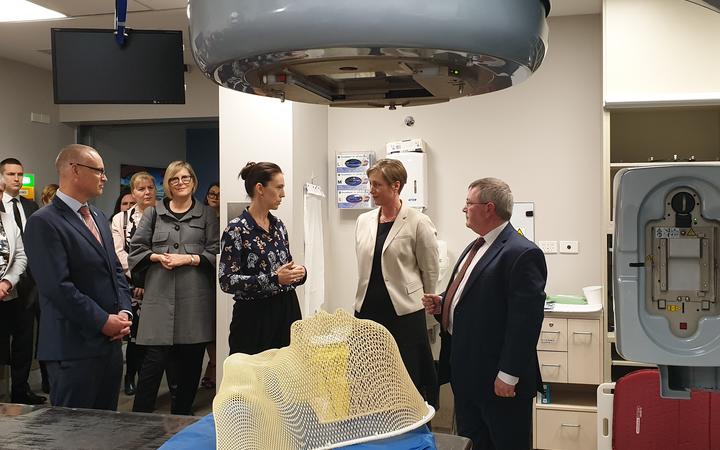 Yesterday, it announced that over the next three years it will replace several ageing radiation machines, and for the first time make radiation treatment available in Taranaki, Hawke's Bay and Northland.

Teacher and mother of two, Julie Salisbury was diagnosed with breast cancer in November 2017 - her prognosis was good - but she had to undergo surgery, and then radiation therapy.

Living just outside New Plymouth meant she had to have that therapy four hours away in Palmerston North, a city where she knew no one.

"The last week was the worst because you're really tired, you're away from your own family and it's a really stressful time anyway, but I think the worst part was actually for the family left behind. My kids especially found it very difficult," she said.

Ms Salisbury said being able to get treatment at home would have made a huge difference to her recovery and mental health.

"You're kinda battling a whole lot of physical stuff but you're also trying to keep yourself upbeat and it's really sad and hard and I think that if you're in your own home environment that emotional toll is not as big."

Health Minister David Clark said one in two cancer sufferers would benefit from radiation treatment, but only one in three are choosing to have it.

He said a big part of that is accessibility.

"We know that distance, situation, and cost is a factor, and that's not a situation we want to see.

"We're a government that believes every New Zealander should have access to high quality cancer care no matter who they are, no matter where they are," Dr Clark said.

Palmerston North Hospital radiation oncologist Claire Hardie said many patients are opting for other treatments because travelling for radiation is too difficult.

"We know that particularly for patients that have breast cancer they may make the decision to have a mastectomy because that may mean they avoid radiation.

"Also particularly in palliation, so where patients have severe symptoms of pain, they may forego the opportunity to have radiation, which is very effective in controlling their pain," Dr Hardie said.

But purchasing and developing the specialist rooms for these machines will take some time.

Hawke's Bay will not get its machine until 2020/2021, Taranaki the year after, and Northland's timing is still being finalised.

National swiftly dismissed the announcement, with leader Simon Bridges describing it as "rushed and underwhelming".

"The reality is this is little more than business as usual that any government has to do, effectively replacing machines that need replacing.

"I don't think it comes anywhere near to the rhetoric the government has set," he said.

Mr Bridges said the government rushed the announcement, in response to the policy National unveiled last week to give Pharmac $200 million over four years for cancer drugs, and create an independent national cancer agency.

Mr Bridges said cancer sufferers will be bitterly disappointed with the announcement.

"They promised world class cancer care and a national cancer agency before the election and now some nearly two years in they haven't delivered any of that," Mr Bridges said.

Funding certainty will make sure DHBs can plan to install the machines - which need special bunkers built for them - and putting them in the regions will make a big difference in addressing the postcode lottery.

"Nobody's pretending these things can be fixed overnight but everybody wants to see a fairer service across the county," he told Morning Report.

"It's a problem we've inherited as a government - we're not looking backwards we're getting on and fixing it because we do want to make sure that people across the country can experience the same high level of care.

"We know that people currently are not taking up the treatment because of the travel involved."

Dr Clark said there was more to come, with the release of the government's Interim Cancer Action Plan later this month, but is not revealing whether it will include the promised cancer agency.