Power Play - The knives are being sharpened in the National Party caucus as dissatisfaction with leader Simon Bridges shows no sign of diminishing.

Simon Bridges said he was a "servant of the caucus and was working really hard". Photo: RNZ / Ana Tovey

MPs are not yet at the point where there will either be a move to force a no confidence vote, or force a resignation; it's not clear any challenger would have the numbers to defeat him, especially while the party vote is holding up above the 40 percent mark.

But the signs of a destablisation campaign are all there.

Private conversations with journalists about the leadership team which inevitably stoke commentary about his position accompanied by obligatory but less than enthusiastic endorsements of Mr Bridges' leadership.

A number of decisions have got MPs' backs up, not the least of which was his decision to launch a full and formal inquiry into the leak of his expenses. That forced all National Party MPs to hand over their phones and laptops to an external group of investigators, giving them full access to all of their communications.

What followed was a series of events that put a huge amount of pressure on Mr Bridges and many of his MPs, and inflicted damaging headlines upon the whole party.

Eyebrows were also raised at his description of a long-serving National Party staffer as "emotional" and "junior" after they took down National's petition against the United Nations' Migration Compact in the immediate aftermath of the Christchurch shootings.

While National's party vote has held up at respectable levels, Mr Bridges' preferred Prime Minister ratings, equalled by potential rival Judith Collins, have also provided fodder for speculation about his ability to engage with New Zealanders - concerns about his popularity and performance echoed by some of his colleagues.

But he went into the caucus today with a brave face "confident and comfortable" in his leadership, emphasising once again the need for caucus discipline and unity but demurring to comment in detail about what he would say to his MPs.

The smile slipped and he visibly faltered when asked if he regretted any of past decisions; he did "not look back" or regret, but was a "servant of the caucus and was working really hard".

The cat and mouse game continued with Mr Bridges repeatedly saying he trusted his colleagues but refusing to say he trusted Judith Collins.

Metres away, Ms Collins, at her most sincere, was telling reporters she supported Mr Bridges because "he's the leader of the party", adding he was the fifth she had served under since becoming an MP.

And should Mr Bridges trust her? "Of course he should," she purred. 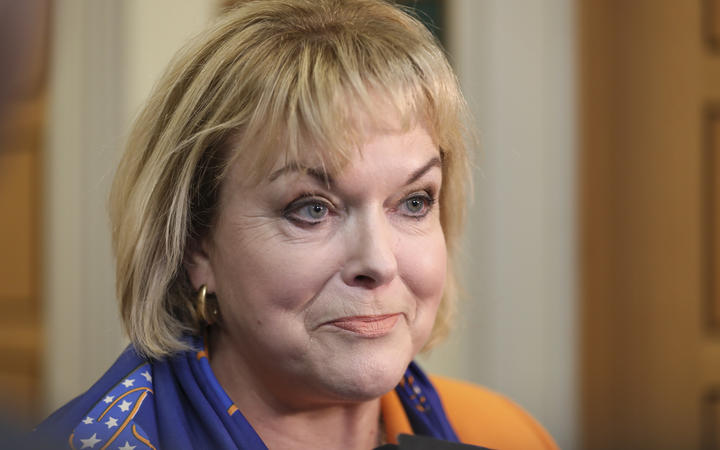 But support for Ms Collins within the caucus does appear to be consolidating, the extent of which is still not clear and would only be truly demonstrated through a caucus vote.

Hers is the only name being raised as a possible replacement but MPs are asking themselves several questions: would she necessarily bolster the party vote? Could she marginalise some current National voters? Could she beat Jacinda Ardern? Should they wait and play a longer game?

A long-time colleague of Ms Collins, Anne Tolley, sums up some of those reservations:

"She polarises people, because she's black and white and unfortunately we win the Treasury benches in the grey areas and those voters who are in the middle."

Much will depend on how Simon Bridges directly interacts with his colleagues in the coming weeks. There is not a clear majority of MPs who would vote against him but the manoeuvring continues. One more mis-step could galvanise those who want to see him replaced and give Judith Collins the opportunity she has long awaited.