Judith Collins has overtaken Simon Bridges in the preferred prime minister stakes, but the leader of the opposition says he's confident in his leadership despite the numbers. 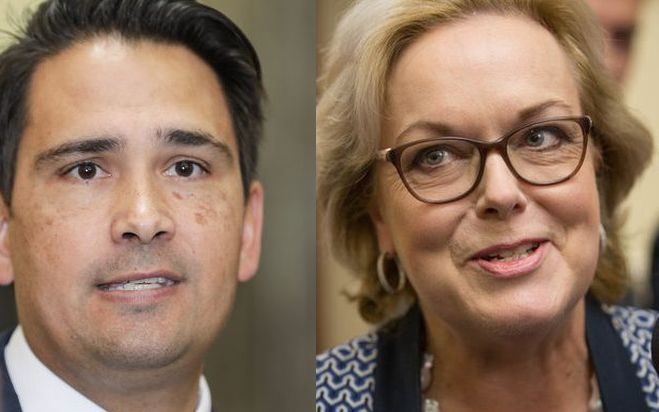 Mr Bridges told Morning Report he's confident and comfortable in his leadership despite the numbers.

"I don't see leadership as some sort of popularity contest, I think it's more serious than that."

When asked if he has sought an assurance from Ms Collins that she will not run for the leadership before the election, Mr Bridges said he speaks with his colleagues all of the time.

"The direct answer is she's made quite clear she's not interested," he said.

He said he sees his role as making sure the National Party has a plan and vision for the next election.

"I believe we're in very good shape to win the next election."

He intends to prosecute the "huge amount of issues" the Labour Party has, he said.

National MPs have backed Mr Bridges as leader despite the low polling.

Deputy leader Paula Bennett backed Mr Bridges as leader of the party and was pleased to see Judith Collins was a popular MP.

"I think Judith is fantastic," she said. "She's a great member of the team and I think it's great people love her."

Simon Bridges told Morning Report Winston Peters is to blame for New Zealand's deteriorating relationship with China but says the prime minister is also at fault.

He said New Zealand's relationship with China has slowly deteriorated over the past year and the Huawei situation has played its part.

GCSB Minister Andrew Little said the decision to turn down the overseas network provider was because the technology was too risky - not because the company is Chinese.

"As I understand it, no one communicated with the Chinese government what was happening, certainly it didn't happen at a political level..."

He said Jacinda Ardern should have already gone to China.

"Winston Peters is to blame but Jacinda Ardern is at fault, she should have been up there maintaining the relationship given the $27 billion trade we have with them."

If National were in power, Mr Bridges said he doesn't know whether the party would allow Huawei to run 5G in New Zealand.

"I cannot say I know what the decision would be ... we would certainly apply the legislation and it would still go through the same process...

"Everything around it has been insensitive, intemperate, has been botched by this government."

National MP Mark Mitchell will be travelling to Hong Kong soon, a pre-arranged trip that is not related to the current issues with China, Mr Bridges said.

"If Mark Mitchell, if I, in a small way could get things back on track we would be open to that."

National MP Mark Mitchell said he would put politics aside this week to help improve New Zealand's relationship with China.

He flew to Hong Kong yesterday for a series of high-level meetings with Chinese Ministers, secretaries and company directors.

Mr Mitchell said he was invited on the justice-focused trip in July last year.

"It appears that the relationship between New Zealand and China at the moment is strained and that's not in anyone's interests," he said.

"I'm very happy while I'm over here, if we can help sort of strengthen that relationship and indicate how important it is to us - I'm very happy to do that."

Mr Mitchell said, even though he was in opposition he wanted to advance New Zealand's interests and he would support the government in that.

"When it comes to foreign and defence policy we should try to be as bipartisan as we can," he said.