The National Party is boxing ahead with its own investigation into who leaked Simon Bridges' expenses to the media after Parliament's speaker put the kibosh on an official inquiry last week. 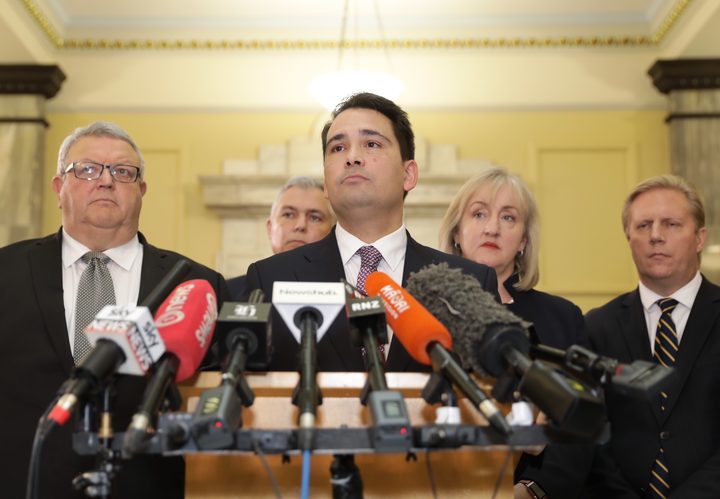 Simon Bridges (centre) speaking to media about the leak of a text from the person behind an earlier leak on his expense spending. Photo: RNZ / Rebekah Parsons-King

On Friday RNZ revealed a person claiming to be a National MP had sent a text message to Mr Bridges and the speaker, Trevor Mallard, pleading for the inquiry to be stopped for the sake of their mental health.

That led to Mr Mallard pulling the plug on the inquiry saying it was unlikely the text had been sent from anyone outside the National Party.

Mr Bridges remains unconvinced that the leaker of his travel expenses is an MP from his own party.

"I'm going to do my part. I'm going to have an investigation and get to the bottom, if I can, of if it is a National MP who is unwell and who needs help, if it is a staffer of mine," he told Morning Report today.

"But the problem is at the moment I do not have a safe basis to say that it is. It may well be someone in the wider parliamentary system or indeed further afield than that."

Mr Bridges said he had kept Mr Mallard informed of the police investigation, and on Thursday he was continuing with an inquiry, announcing it was to be led by a QC.

"On Friday afternoon he stopped it - he canned it. The only thing that's changed that I can see is the prime minister saying it's internal matter of the National Party."

He told Morning Report today there was strong support for his leadership, and there was no basis to question that because the party did not know the identity of the individual who leaked the information on his expenses.

"I've talked with effectively all of my MPs ... they are very united and strong in the fact that actually we don't think it's one of us, but if it is let's help them and lets do what we can."

He said police told him they would ensure the person had all the wraparound support they needed.

'We need to know who that person is'

Shadow leader of the House Gerry Brownlee said the National Party needed to know who the leaker was and will push ahead with uncovering the person's identity, after Mr Mallard had washed his hands of an inquiry.

"Well of course we think he's obfuscated his role as Speaker, but he did so after the prime minister had declared it was a problem for the National Party.

"We will now obviously conduct an inquiry, because we need to know who that person is, to either stamp out a problem, or to in fact wrap around someone who has some serious issues,'' Mr Brownlee said.

On Thursday 16 August Mr Bridges and Mr Mallard received an anonymous text from the person who leaked the opposition leader's expenses, saying if the inquiry exposed them publicly it would push them over the edge and put their life at risk.

The leaker provided information and details from caucus meetings over a period of weeks in order to prove their identity as a National Party MP.

Mr Bridges met with police about the matter the next day and on Sunday 19 August they contacted him to say they knew who the person was but would not be revealing their identity.

The following morning Mr Bridges spoke to Morning Report's Susie Ferguson and when she asked what it said about the support for his leadership if the leaker was indeed a National Party MP. He said: "That is pathetic frankly, we haven't got to that point. Let's see what happens. I don't believe it is - I think we've got a government who is seeking to distract . But as I made quite clear to you, obviously, if that were the case we would have a stern way of dealing with this. That would include the full gamut of options."

Fast forward to last Thursday and the inquiry gained more traction when Mr Mallard announced the appointment of QC Michael Heron to lead it.

That night Mr Bridges declined to comment when RNZ approached him about the text he had received a week earlier. The story broke on RNZ last Friday morning.

Mr Bridges then fronted media in Wellington where he said he was balancing making sure the person who sent the text got help while also ensuring the integrity of Parliament was upheld.

It was during that press conference that Police Minister Stuart Nash learned of the full involvement of police in the matter.

Mr Nash's office has confirmed that neither the minister nor his office were aware police had played a role until RNZ broke the story.

Under the 'no surprises policy' ministers can be told information that they may end up being asked to respond to by the media.

However, in this case, police only contacted Mr Nash's office shortly before 7am - after the story broke - and did not provide any details of their involvement.

As for any inquiry, the National Party will now deal with it, and Mr Brownlee said there would be very little public comment about how they would go about it.