The race to find a new leader for the National Party is underway with MPs expected to declare their intentions in the coming days. 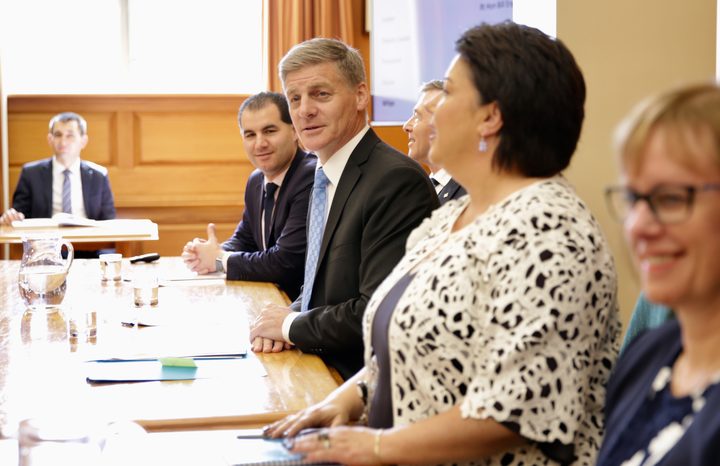 Bill English has not endorsed a successor and will leave it to his MPs to elect a new leadership team. Photo: RNZ / Richard Tindiller

The caucus has just two weeks to decide who will replace Bill English after he announced yesterday he would quit politics later this month.

Mr English has not endorsed a successor and will leave it to his MPs to elect a new leadership team, including the deputy.

No one has yet to officially throw their hat in the ring, but potential contenders include Tauranga MP Simon Bridges, Selwyn MP Amy Adams and Papakura MP Judith Collins.

Senior MP Steven Joyce would not rule himself in or out yesterday, saying Mr English deserved time first to say goodbye.

"He's done a fantastic job ... he's earned the right to have his day and say farewell. We'll talk about everything else after that."

Asked whether the contest could become a bloodbath, Mr Joyce said National was a "very sensible party" focused on doing a good job for New Zealanders.

"All of us will keep our eyes very firmly on that. We're here for the voters, not anybody else."

National deputy Paula Bennett declined to make any comment yesterday but at last week's caucus retreat in Tauranga she said she had no ambitions to lead the party.

"I do not intend at any stage to go for leadership in any of the permutations that might happen in the future," she told reporters.

"You're all not going to believe it until that happens. Because other politicians have said it previously and then changed their tune."

Mr English yesterday revealed he had told both Mrs Bennett and Mr Joyce of his plan to step down ahead of last week's retreat.

He said he was confident the caucus would not rip itself apart in the contest "because they know it doesn't work".

"That's a recipe for staying in opposition regardless of the quality of government."

Mr English entered Parliament in 1990 as the MP for the Wallace (now Clutha-Southland) district.

He served as Health Minister, Treasurer and Finance Minister before being appointed the party leader in 2001. After National's bruising election defeat the following year, he was replaced as leader by Don Brash in 2003.

Following National's victory in 2008, he was appointed as Finance Minister and deputy Prime Minister. He then took over the leadership from John Key when he stood down in December 2016.